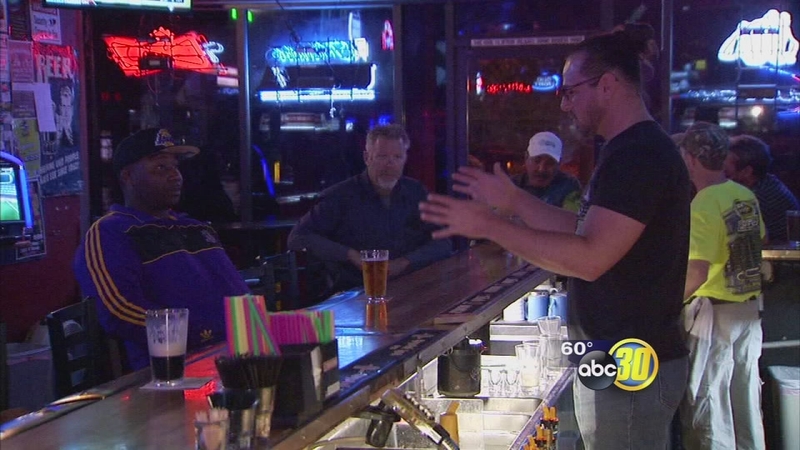 FRESNO, Calif. (KFSN) -- Besides mixing drinks and greeting patrons bartenders in California could soon have another added responsibility.

Currently, you don't need a license to be a bartender in California, but bartenders are encouraged to take a voluntary class to learn about the effects of alcohol. However, under a new bill that would be mandatory.

Between greeting, making and pouring drinks for customer Ty Walker is also a cautious observer. "I've been doing it 10 years, it's pupil dilation, slurred speech, all the obvious things," Walker explained.

Walker says he is often the first line of defense trying to prevent drivers from getting too intoxicated to hit the road. A new proposed bill is trying to make this a legal requirement at every bar in California. "The more you're educated about responsible alcohol use and service, the less DUI's you are going to get," he said. "Cutting them off sooner, making sure they got rides."

Under the proposal bartenders would have to take a four-hour class, teaching them intervention techniques and the impact of alcohol on the body. "A lot of bartenders take for granted," bartender William Whitehurst explained. "They don't think necessarily how somebody gets home, that's just the progression, they are going down the street."

While many bars say they are all for it, DUI attorneys say they are skeptical about the results. "So, the bartender cuts somebody off, they are obviously impaired. Is the bartender now responsible to call a taxi to take the guy's keys," attorney Scott Levy asked. "Where does it end?"

Bartenders would need to complete the class within three months of being hired and retake it every 3 years.

If they don't, the bar could have its liquor license pulled. "You are going to have prosecutors abuse this law and say 'well the bartender did not do his job, he did not police his bar,'" Levy said.
Related topics:
fresnolegislationgovernmentfresnocaliforniabills
Copyright © 2021 KFSN-TV. All Rights Reserved.
FRESNO
Armed men rob 2 Fresno grocery stores within an hour, police say
Where to see holiday lights in Fresno and Clovis
Where to see holiday lights in Fresno and Clovis
Fresno Humane offering free pet microchips this month
TOP STORIES
Family of 5 from Fresno killed in shooting in Mexico
2 arrested for string of business burglaries in Merced
Fresno State football hires Jeff Tedford to return as head coach
Fresno teacher gets million of views on TikTok with dance moves
2 accused in deadly shooting at Hilmar restaurant arrested
Veterans honored at Pearl Harbor Remembrance Ceremony at Tesoro Viejo
Evidence of COVID-19 omicron variant found in Merced, scientists say
Show More
'Political free-for-all' as Rep. Nunes leaves House of Representatives
Woman using teddy bears to help Fresno police with young victims
Major outage hits Amazon Web Services; many sites affected
Deputies: 14-year-old Visalia boy arrested for threatening classmates
50 mutations in omicron could be its downfall, data shows
More TOP STORIES News