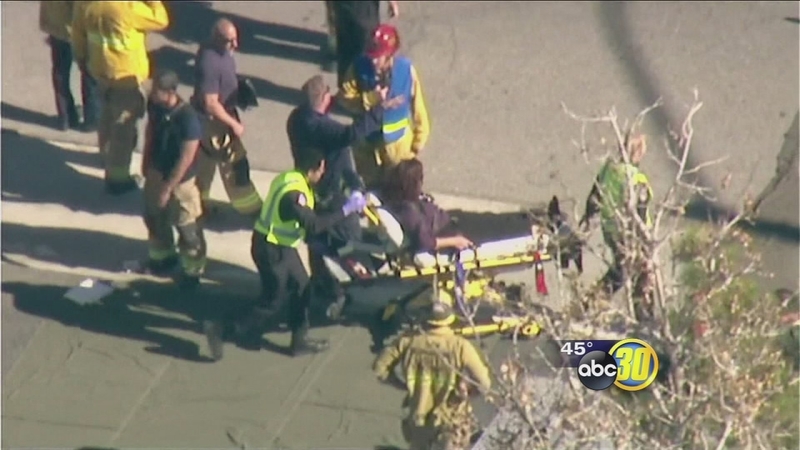 FRESNO, Calif. (KFSN) -- In San Bernardino people of all faiths were shocked by what happened and they're seeking comfort in a higher power.

At the Corona Islamic Center where some of Syed Farook's family members go to pray, police patrolled to keep the place safe. The people left behind after the last prayers of the day didn't want to talk on camera, but they told Action News they've never seen Farook before.

What Farook is accused of doing these Muslims have seen and they condemned it. Every human life is valuable, they said. It's much the same message delivered at the rock church, not far from the scene of the shooting. "Service was great, you know, just a very heartfelt prayer service," said Jaime, Riverside.

Regular Wednesday services here focused on the victims, their families, and the huge loss to this community. "Focus, you know, on shedding the light for Jesus. For the residents here in the community," explained Jaime.

But they tell me there's one place to look for healing.

Investigators haven't revealed any motive in the shooting yet, but the Muslims we talked to told me this is clearly an example of extremism, whether religious or otherwise. They also said they're very disappointed to know it involved at least one of their own.

Back here at home at the sister facility of the Inland Regional Center in Northwest Fresno signs were still on the doors from earlier in the afternoon when they shut down their facility in response to the Southern California shooting. Their plan is to open back up on Thursday, but it will likely be a tough day for those returning.

In a video from the evacuation of the Inland Regional Center, you can see people being escorted out, their hands in the air, some crying while walking. Scared victims trying to make it out as an officer tries to comfort them in the wake of the horror. "Try to relax. Everyone try to relax. I'll take a bullet before you do; that's for damn sure," he said.

Quite the difference from video taken just 24 hours before the shooting spree where clients celebrated the holidays. "It's heart wrenching. And actually a lot of or staff were grateful to be sent home," said Heather Flores, CRVC Executive Director.

The news is hard for Flores to think about. She's the executive director at the sister facility and works with people at the San Bernardino center. "We do have friends and coworkers down there," said Flores.

Authorities don't yet have a motive, but they say the San Bernardino County Department of Public Health was having a banquet and the shooting happened in a conference area. "Many of the centers including central valley regional center have conference areas attached to the buildings and a lot of times will allow other community partners to use those facilities as well," said Flores.

The Central Valley Regional Center building hasn't shut down in its 15 years of service at this location. But on Wednesday they closed their doors. At this time, there're no known threats against any other regional centers.

The plan is to be open Thursday, in Fresno, Merced, and Visalia.

Meanwhile, all over Fresno, church services were filled with people praying for San Bernardino.

Across town, at Peoples Church, there were more prayers-- not just for the victims but also the families of those who set out to destroy lives. "Many times this comes out of nowhere for them too and the persecution and what's gonna go on for those families too, we're just sickened by this whole situation," Pastor Matthew Markarian added.

Back at Cornerstone, Lorenzo Zamora watched the doors a little closer during the service. "We can't overlook things, especially now, people are just losing their minds," Zamora said, "it's sad too, we have to be on guard too because they can walk in here just as well as they do over there."