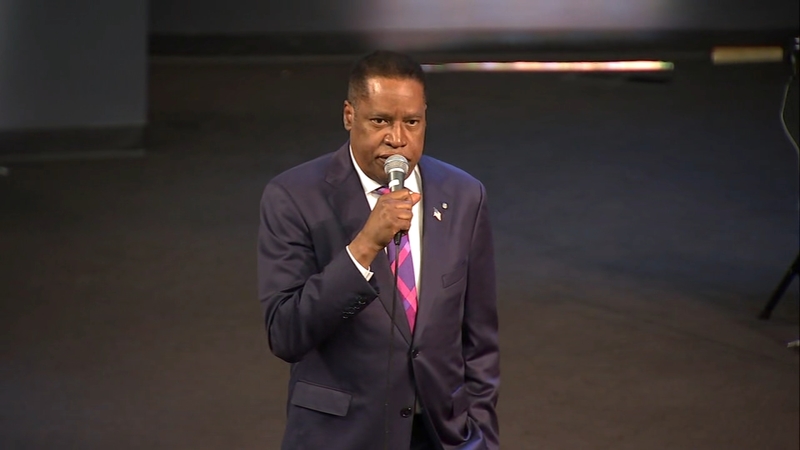 SAN JOSE, Calif. -- The gubernatorial recall election is about one month away and mail ballots have already started going out in some counties.

Republican Candidate for Governor of California Larry Elder was greeted by cheers from a packed crowd at Calvary Church in San Jose Thursday afternoon.

RELATED: Gov. Newsom to kick off 'Vote No' campaign with rally tomorrow in SF

With the election inching closer, Elder took aim at Gavin Newsom as he looked to rally support.

"This man that I'm going to defeat on September 14, he shut down the state in the most severe way than any of the other 49 governors have," Elder said.

The crowd came from across the state to the South Bay to hear their favorite candidate speak on ways he would improve California, including cost of living, forest management, homelessness and crime.

As ballots are being sent out to every registered voter across California, polls show Gov. Newsom locked in a tight race for the recall election.

The people who we spoke with have made up their minds. They say Larry Elder is the best person to fix these problems.

"He's a business guy, he's well-known, he's well-spoken and a lot of his ideas will fit well with the state," Lynn Schultz said.

"We have an opportunity to get rid of a tyrant who just yesterday threw everyone connected to education under the vax bus," Lisa Disbrow said.

Larry Elder is strongly against vaccine or mask mandates for the state.

The emergence of the Delta variant could work against Gavin Newsom in California's recall election, a political expert says.

In the same church that defied COVID-19 guidelines last year, Elder made a promise to the mostly maskless crowd.

"When I get elected, assuming there are still facemask mandates and vaccine mandates, they will be repealed right away and then I'll break for breakfast."

Governor Gavin Newsom's campaign sent out an email in response to Elder's views on COVID-19.

The email said Elder would be a disaster for California and it's no wonder Donald Trump and Larry Elder get along so well.

Governor Newsom will be in San Francisco tomorrow as part of a state wide tour to vote no on the recall.

Calvary Church will be at the forefront of the recall election again next week.

They will host a republican debate on Aug. 21, 2021 featuring four candidates including Doug Ose and John Cox.

Larry Elder has not said whether or not he will attend.

Go here for the latest articles and information about California's recall election.