AP
PARADISE, Calif. -- A fierce wildfire in Northern California incinerated most of a town of about 30,000 people with flames that moved so fast there was nothing firefighters could do, authorities said Friday. Nine people died in what quickly grew into the state's most destructive fire in at least a century.

Only a day after it began, the blaze near the town of Paradise had grown to nearly 140 square miles (362 square kilometers), had destroyed more than 6,700 structures - almost all of them homes - and was burning completely out of control.

"There was really no firefight involved," Capt. Scott McLean of the California Department of Forestry and Fire Protection said, explaining that crews gave up attacking the flames and instead helped people get out alive. "These firefighters were in the rescue mode all day yesterday." 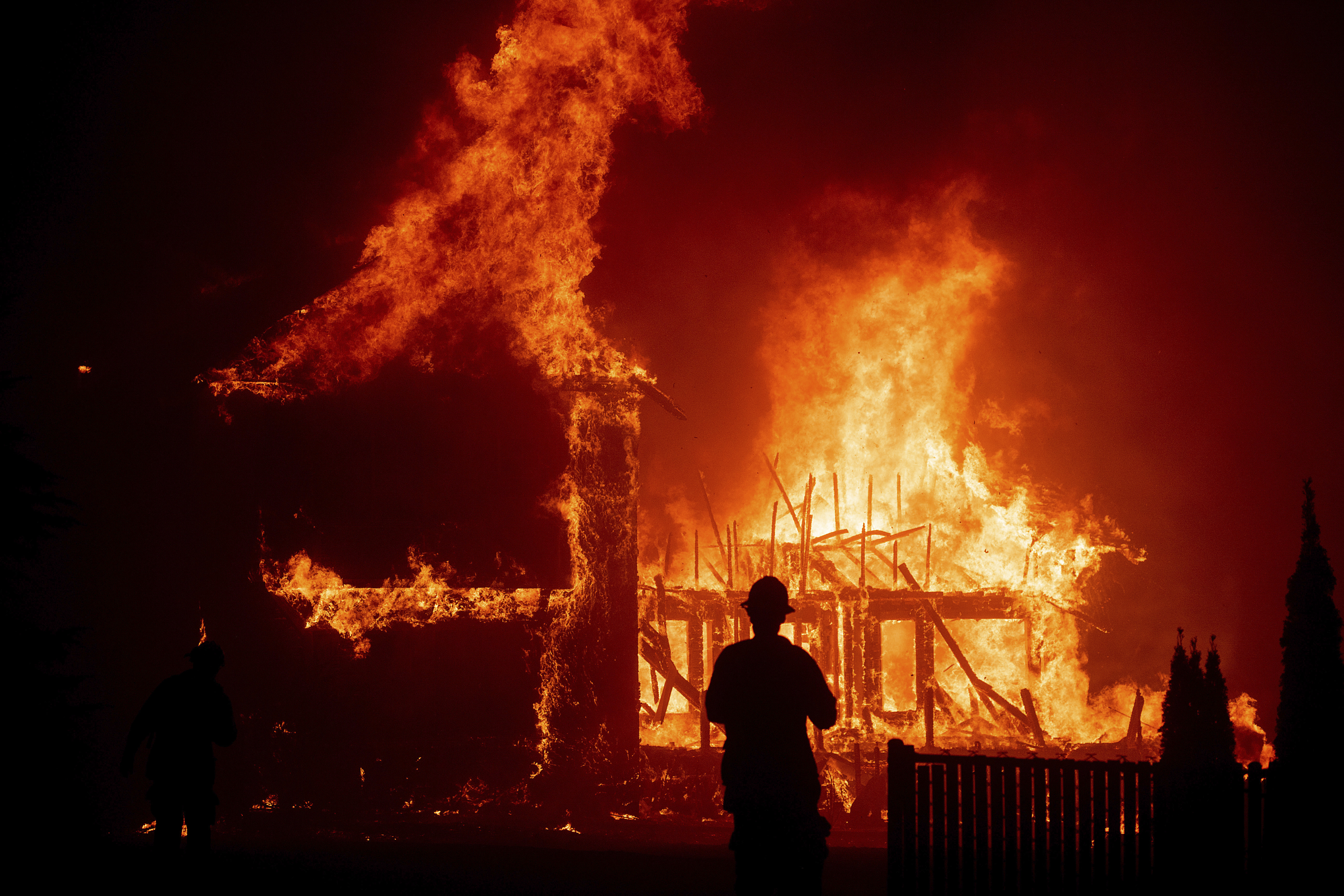 When Paradise was evacuated, the order set off a desperate exodus in which many motorists got stuck in gridlocked traffic and abandoned their vehicles to flee on foot. People reported seeing much of the community go up in flames, including homes, supermarkets, businesses, restaurants, schools and a retirement center.

From a pregnant woman who went into labor while being evacuated to seniors in a nursing home that can't get through to 911, here's the terrifying police radio detailing the terrifying evacuation in Butte County.

Rural areas fared little better. Many homes have propane tanks that were exploding amid the flames. "They were going off like bombs," said Karen Auday, who escaped to a nearby town.

McLean estimated that the lost buildings numbered in the thousands in Paradise, about 180 miles northeast of San Francisco. 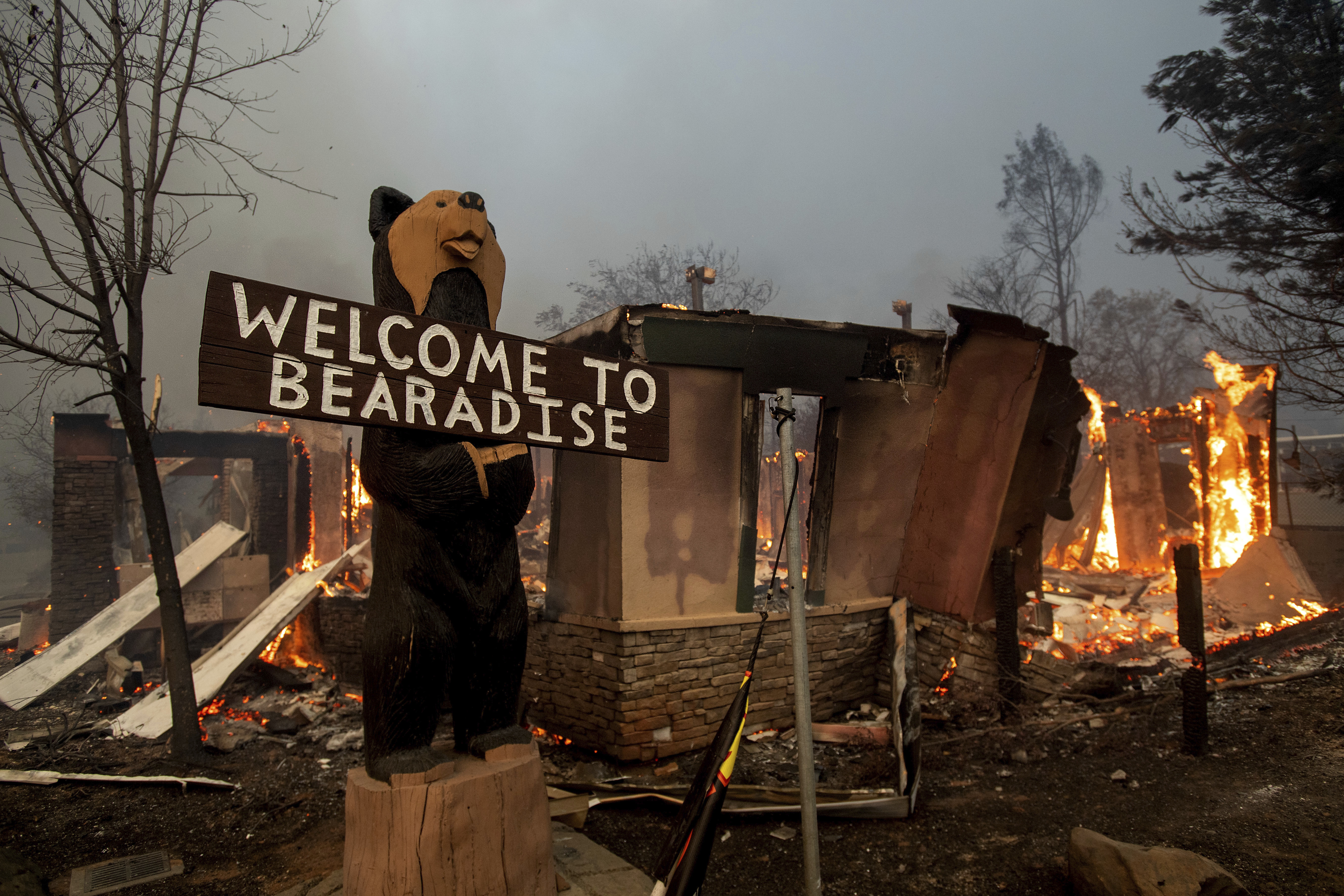 "Pretty much the community of Paradise is destroyed. It's that kind of devastation," he said.

On Friday morning, The Butte County Sheriff's Office confirmed that five people have been found dead in vehicles torched by flames. The victims were found in the same area in the town of Paradise.

On Friday night, authorities confirmed a sixth fatality but did not provide circumstances of death.

While the cause of the fire wasn't known, Pacific Gas & Electric Company told state regulators in a one-paragraph summary it experienced an outage on an electrical transmission line near Paradise about 15 minutes before the blaze broke out. The company said it later noticed damage to a transmission tower near the town. The utility's filing was first reported by KQED News.

RELATED: PG&E says it had problem near starting point of Camp Fire

The wind-driven flames also spread to the west and reached Chico, a city of 90,000 people. Firefighters were able to stop the fire at the edge of the city, Cal Fire Cpt. Bill Murphy said.

There were no signs of life Friday on the road to Paradise except for the occasional bird chirp. A thick, yellow haze from the fire hung in the air and gave the appearance of twilight in the middle of the day.

Strong winds had blown the blackened needles on some evergreens straight to one side. A scorched car with its doors open sat on the shoulder. 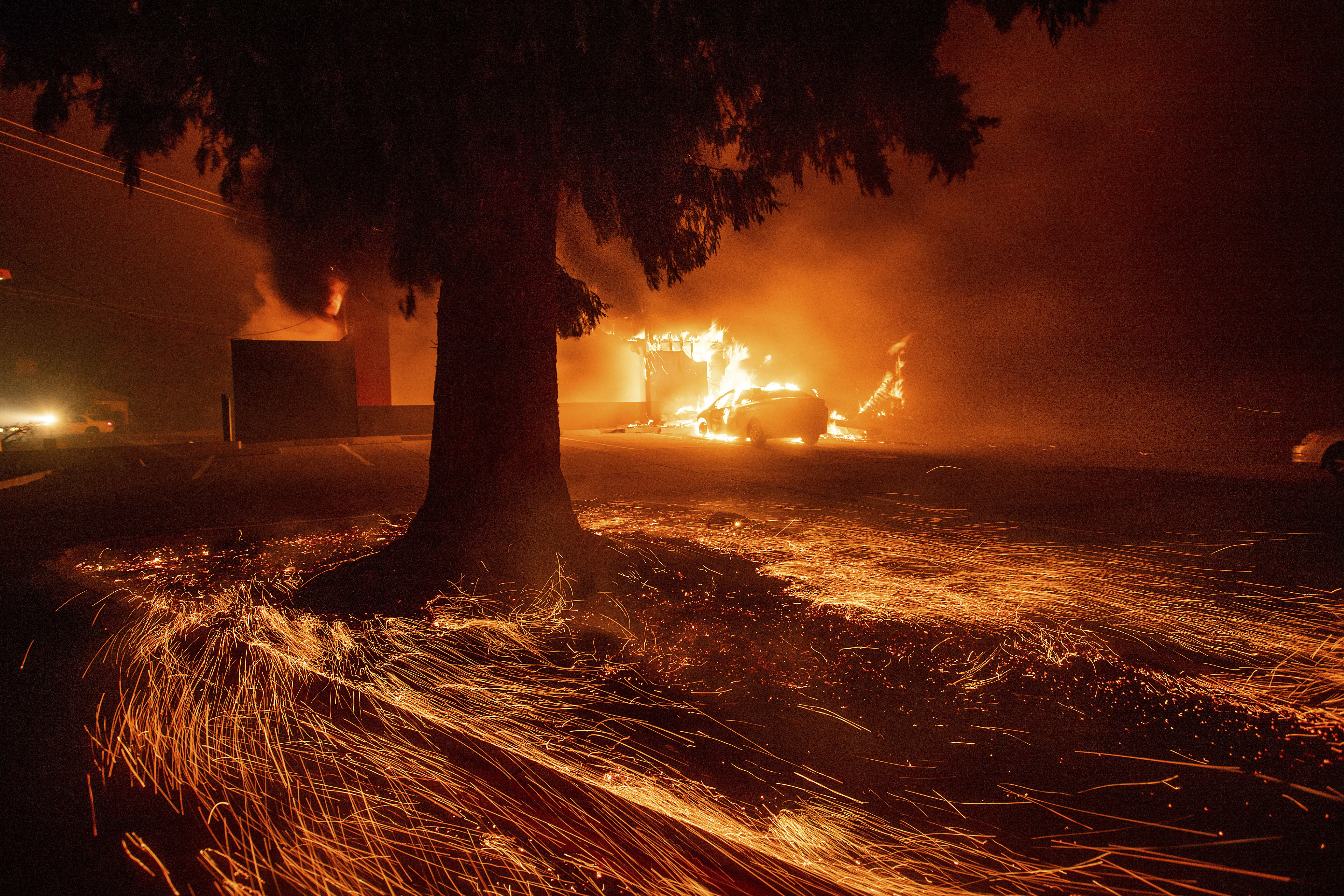 At one burned-out house, flames still smoldered inside what appeared to be a weight room. The rubble included a pair of dumbbells with the rubber melted off and the skeletons of a metal pullup bar and other exercise equipment. The grass and elaborate landscaping all around the brick and stucco home remained an emerald green. Red pool umbrellas were furled near lounge chairs and showed not a singe on them.

Evacuees from Paradise sat in stunned silence Friday outside a Chico church where they took refuge the night before. They all had harrowing tales of a slow-motion escape from a fire so close they could feel the heat inside their vehicles as they sat stuck in a terrifying traffic jam. 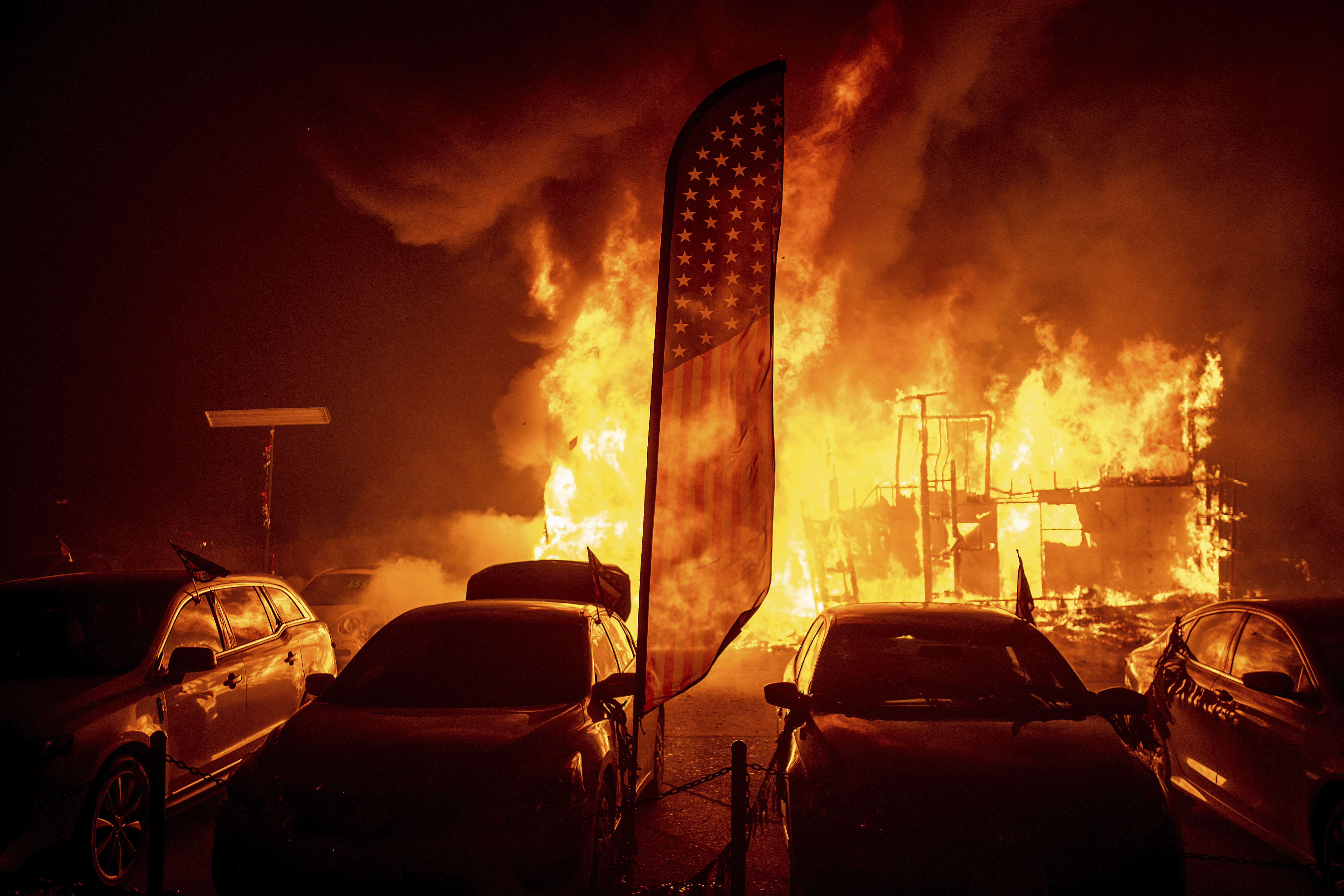 Flames consume a car dealership as the Camp Fire tears through Paradise, Calif., on Thursday, Nov. 8, 2018.

When the order came to evacuate, it was like the entire town of 27,000 residents decided to leave at once, they said. Fire surrounded the evacuation route, and drivers panicked. Some crashed and others left their vehicles by the roadside.

"It was just a wall of fire on each side of us, and we could hardly see the road in front of us," police officer Mark Bass said.

Get the latest on the Camp Fire burning in Northern California here.

ABC7 News and the Associated Press contributed to this report.