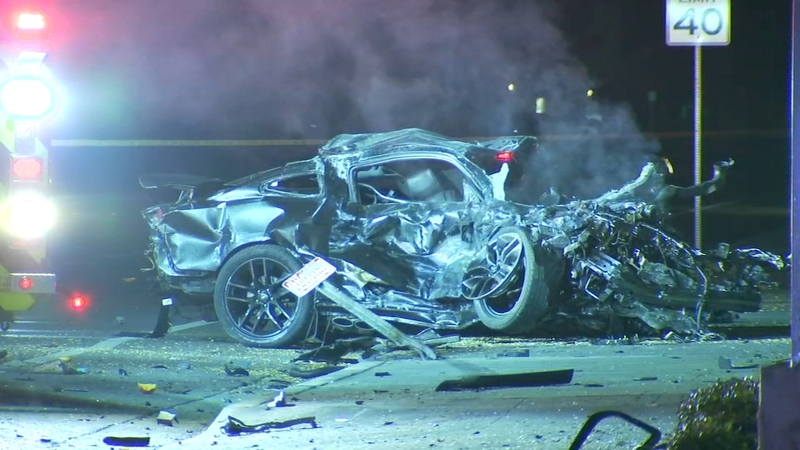 FRESNO, Calif. (KFSN) -- UPDATE: The victims in the three-car crash in northwest Fresno have been identified.

The three people in the pickup truck who died have been identified as 27-year-old Christopher Vang, 21-year-old Linda Chang and 17-year-old Allison Chang. The relationship between the three is not known at this time.

The driver of the Mustang who died has been identified as 18-year-old Irvin Villarreal. Investigators say he is responsible for the deadly crash.

Dozens of candles and bouquets sit on a street corner near Bullard and Palm in northwest Fresno.

They were placed here by loved ones after a three-car crash claimed the lives of four people Saturday night.
"We have got young kids that are involved in this accident," said Lt. Charlie Chamalbide with the Fresno Police Department.

Chamalbide believes a black Mustang sped through a red light and smashed into a truck and a Mini Cooper.

Surveillance video from a neighboring gas station captured the moments leading up to the crash.

In it, you can see the Mustang zooming through the intersection. Moments later, debris flies into the frame.

"When they arrived, there were pieces everywhere of the vehicles," he said.

Five people were inside the white truck.
Officers said two died on impact, a third at the hospital and the remaining two are still in critical condition.

Chamalbide said a 17-year-old girl was inside the Mini Cooper. She's expected to survive her injuries.

As for the driver of the Mustang, officers say they were pinned inside the car.

Firefighters had to get the driver out, who later died at the hospital.

"I was talking to some of the officers that were out there and that was one of the most horrific scenes that they had ever seen in their career," said Chamalbide.