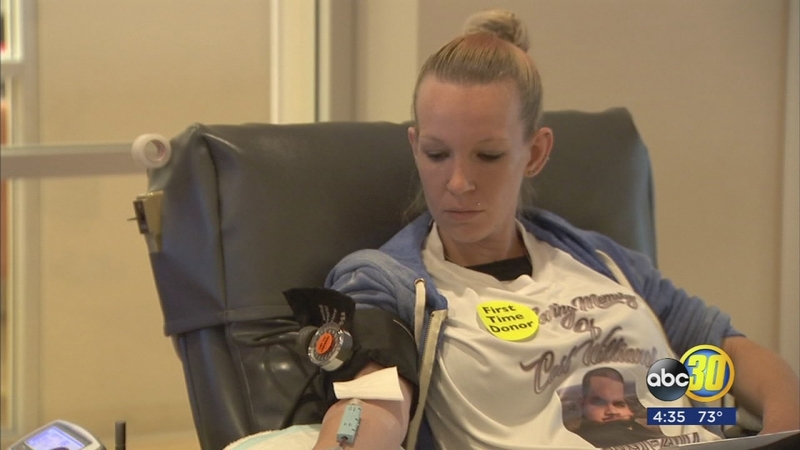 FRESNO, Calif. (KFSN) -- Tributes to the fallen victims in Tuesday's massacre continue to grow after the suspected gunman Kori Muhammad went on a shooting rampage killing three people. But there is a fourth victim the tributes honor.

"He was a good soul, he was giving, a hard worker, a loving person," said Francine Williams-Hicks, Carl Williams' mother.

Family and friends of 25-year-old Carl Williams gathered at the California Blood Center to honor his memory by saving lives.

"That's what he would want," said Williams-Hicks.

Williams' loved ones are still in shock; according to police, the unarmed security guard was fatally shot responding to an incident at the Motel 6 Muhammad was staying at.

Williams' sister Shirkey is celebrating her 30th birthday by honoring his memory. Despite being five years his senior, she said Williams was more like a big brother.

"He was a big teddy bear and if you needed him he would just be there and he was the best uncle."

Despite his fear of needles it was Shirkey who convinced Williams to give blood for the first time. That became tradition-- giving once every two months.

"Carl was so proud of that and he just wanted to do good."

Williams was balancing two full time jobs, he and his fiancée Wendy were saving to buy a house and raise a family.

In addition to his work load, Williams was a mentor in the Big Brother Big Sister Program.

Family members and friends hope to add to that legacy he left.

"This is a beautiful community and Fresno is amazing and strong, and Fresno has so much love they've supported us so much and prayed for us," said Shirkey.

Despite the events that unfolded Williams' mother said she takes comfort in knowing her son wasn't alone in his final moments. His best friend happened to be there, holding him until help arrived.

"He was able to look at him and go in peace," said Williams-Hicks.