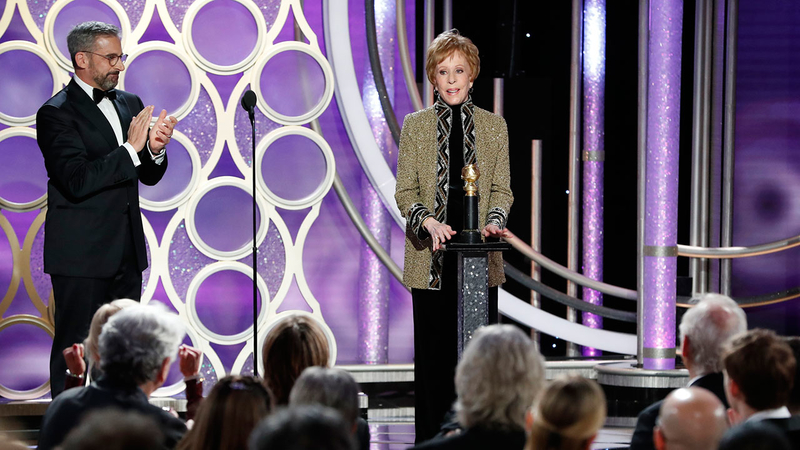 Carol Burnett reflects on working in TV at Golden Globes

BEVERLY HILLS, Calif. -- Legendary actress and comedian Carol Burnett said her dreams came true when she caught lightning in a bottle with her namesake variety show, a feat she thinks "couldn't be done today" in its same form.

Burnett, 85, sounded off on her success and the changing face of television during the Golden Globe Awards on Sunday night as she accepted the inaugural Carol Burnett Award, the show's new top honor in television achievement.

"The cost alone would be prohibitive," Burnett said of the possibility of another program like "The Carol Burnett Show," which ran for 11 seasons on CBS from 1967 to 1978 and won 25 Emmys. "Twenty-eight piece live orchestra -- no synthesizers. Twelve dancers. An average of 65 costumes a week. And there was the brilliance of our regular (actors)."

"Nothing like our show...could ever see the light of day today because the networks, they just wouldn't spend the money," Burnett said. "Sad to say, today's audiences might never know what they're missing."

Audiences might not see new programs like Burnett's, but she gave a nod to "reruns and YouTube" for helping her program "connect with people in a way that makes me very proud" decades later.

While television itself might have changed, Burnett said, one thing remained the same for her and so many others: "the belief that we have been given the opportunity to do something special."

"We have been granted a gift, a canvas to paint with our talent, one that can make people laugh or cry, or maybe do both," she said of the opportunity to work in television.

"I'm just happy that our show happened when it did and I can look back and say once more, 'I'm so glad we had this time together,'" Burnett finished, a nod to her iconic show's theme song.