Caruthers' Monster: The freshman playing four sports at once 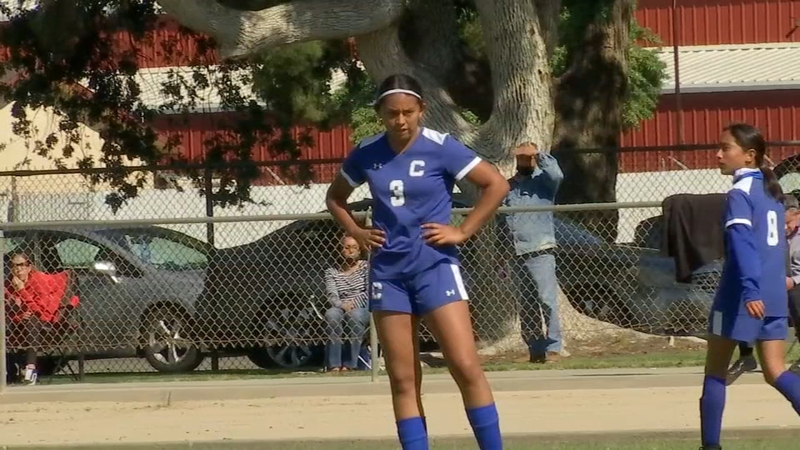 Caruthers' Monster: The freshman playing four sports at once

FRESNO, Calif. (KFSN) -- "My name is Gizelle Aguirre and I play volleyball, basketball, softball and soccer."

"We recruited her over to basketball, as time went on she was a beast of a softball player," says basketball coach Anna Almeida. "Volleyball was something that we added recently."

The freshman says she's grateful that Caruthers is allowing her to play in all four sports, a circumstance unique to the pandemic.

"It's been crazy," she said. "My coaches, we have a schedule of what practices and games I can go to. Sometimes, they'll schedule games earlier so I can go to the next game. It's crazy but I like it."

Last week, she scored eight goals in a single game - beating a Caruthers record set by her sister who scored seven.

"Once I got eight, I got taken out of the game because we were already winning but I was like, I don't care," she said. "I just wanted to beat my sister."

Through seven games - she's hitting .750 at the plate, and is one of seven softball players who also play basketball. Caruthers and the teams' parents pitched in to start a college-like program so that the girls stay injury-free.

"They've waited an entire year to play sports, we don't want them to have to wait another year," Almeida said. How can we protect their bodies? It's our responsibility as adults to make sure that they can continue to compete."

The Blue Raiders purchased a compression device to help with recovery and have even created meal plans. The girls eat anywhere from 3,700 to 5,000 calories a day and have to check in with Almeida on what they're eating for breakfast.

"For me, when I go from one game or practice to the next, she'll bring me a peanut butter and jelly sandwich to eat so that I don't feel sick from going from all those sports, so she makes sure we're all healthy," Aguirre said.

Aguirre goes by the nickname 'Monster" but says it's not because of her talent.

"People think it's because I play all these sports, but it's because when I was little, my hair was huge and when I would wake up, I would look like a monster and still is to this day," she said.

These days -- "Monster" goes through three to four practices a day.