Officials suggest using an electric engraver to write your VIN or license plate number onto your catalytic converter.
KFSN
By Nathalie Granda 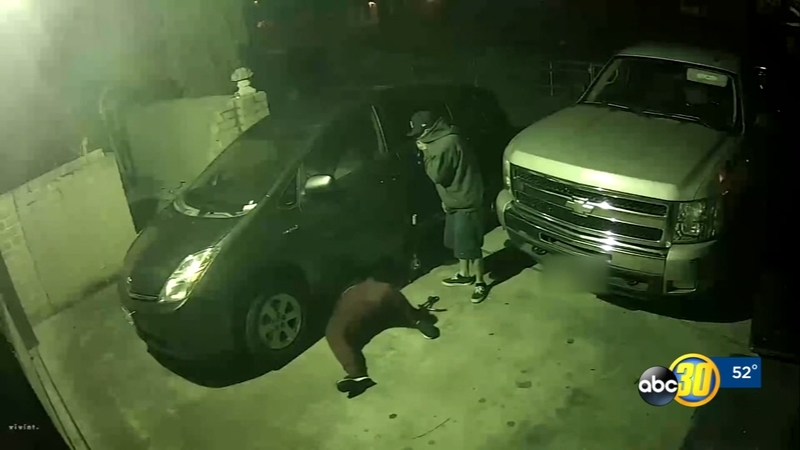 FRESNO, Calif. (KFSN) -- It's a crime that only takes minutes - thieves stealing catalytic converters from underneath your car.

Sheriff's officials say the crime has been steadily increasing - but not just in the South Valley.

Fresno County sheriff's deputies say they've also seen the increase, and thieves have recently been in the market for a specific find.

A video from February 3rd near Ashlan and Marks shows thieves in just minutes get underneath the Prius, saw off the catalytic converter, and leave.

In another video days later off Belmont, the criminals almost get away with the steal, until the car alarm scares them off.

Stephanie Dreadan says her 24-year-old son had his 2001 Prius catalytic converter stolen in the middle of the night two weeks ago, leaving the young family with thousands of dollars in repairs.

Billie Catching of Arams Auto Motor service says thieves are targeting older Prius cars because those who want to keep their older cars may not want or be able to afford to pay for a new catalytic converter.

"If they come up with a used solution that a friend of a friend gets them a catalytic converter for 500 or 600 bucks, that's an opportunity to get it smogged and keep driving it," Catching says.

Sheriff's officials suggest using an electric engraver to write your VIN or license plate number onto your catalytic converter.

Catching also says a lot of their stolen catalytic converter repairs come from apartment complexes, or people not moving their cars as they're working from home.

He suggests not keeping your car parked in one spot for a long period of time, while sheriff's officials suggest putting your car in a garage if possible.
Report a correction or typo
Related topics:
tulare countyfresno countyauto thefttheftcrime
Copyright © 2021 KFSN-TV. All Rights Reserved.
THEFT 2 arrested in connection to Clovis burglaries