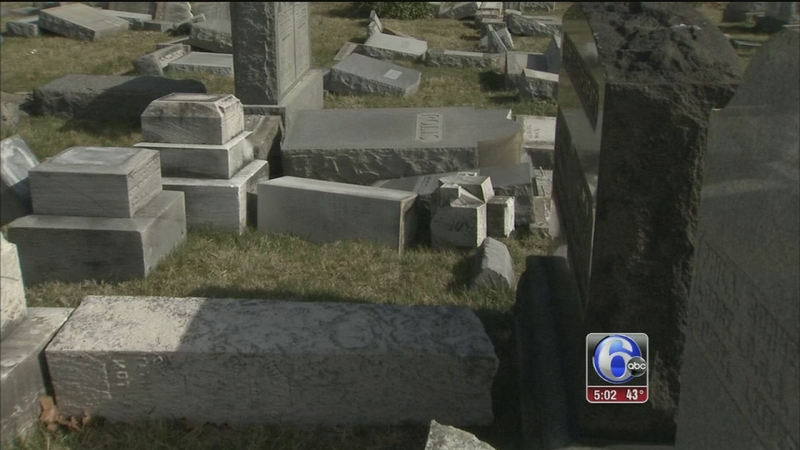 WISSINOMING -- A reward is being offered after more than 500 headstones were vandalized at a Jewish cemetery in the Wissinoming section of Philadelphia.

The Mizel Family Foundation, through the Anti-Defamation League, is offering a $10,000 reward for information leading to the arrest and conviction of the individual(s) responsible.

Reporter Bob Brooks spoke with a local rabbi, who came out with a group of people of all faiths to look over the damage and restore the headstones.

"This is people from Quaker, Muslim, Jewish communities. Some Rabbis, my colleagues, we just heard about this thanks to your reporting, and came out here out of the desire to be in solidarity to show that we're not interested in any narrative about victimization and as heartbreaking as this is, we are strong together.

"I just met two congregants of mine who were here, one whom has relatives. His way of responding was to go row by row and count, and he's counted over 500 tombstones," the rabbi said.

Police say this was an act of vandalism at the Mt. Carmel Cemetery on the corner of Frankford and Cheltenham avenues.

Aaron Mallin of North Jersey made the disturbing discovery Sunday when he came to visit his father's grave.

"It's just very disheartening that such a thing would take place," Mallin said.

Hundreds of headstones - well over 100 years old - were split in half.

It's an egregious act of vandalism that's deeply saddened those who have family buried here.

"Why? I think that's the only thing you could say because there's really no reason for it to be done," said Mallin.

Philadelphia police detectives were on the scene Sunday investigating.

One woman who came to check on her family stones says this could only be one thing.

"What looks like a systematic destruction has got to be anti-Semitism. I can't think of anything else," she said.

Though some others were holding onto hope it's not a targeted attack.

"I'm hoping it was maybe just some drunk kids. But the fact that there's so many, it leads one to think it could have been targeted," Mallin said.

The damage is widespread, but it's hard to get an exact count on just how many tombstones were knocked down or even when.

It seems everywhere you look, you'll notice another headstone knocked down.

"I don't know much about, either through the police or the official Jewish community, details. I just know that there are things in formation now and there will be communal response. People have already started to ask 'Are there some places to contribute or how to organize?' That'll unfold I'm sure through the city Jewish Federation in the next 24 hours," the rabbi said.

The Jewish Federation of Greater Philadelphia tells Action News they will be opening a mailbox at jewishphilly.org later Sunday to begin raising money to help speed up the repairs of the cemetery.

Vandals target Orchard Park cars, bridges with Nazi and racist graffiti in Buffalo. Evil and hatred must be stopped. Now.

My heart breaks for the families who found loved ones’ headstones toppled. We stand w/our Jewish brothers & sisters https://t.co/tBq9Mtxtqr

"The vandalism of Jewish headstones at a Phila. cemetery is a cowardly, disturbing act. We must find those responsible and hold accountable," said Gov. Wolf.

The vandalism of Jewish headstones at a Phila. cemetery is a cowardly, disturbing act. We must find those responsible and hold accountable. https://t.co/6eM0G2tC4S

"This is a despicable act of vandalism- these acts of hate cannot be tolerated," said Sen. Casey.

This is a despicable act of vandalism- these acts of hate cannot be tolerated. https://t.co/4xiLJRzi5e via @6abc

"My heart breaks for the families who found their loved ones' headstones toppled this morning. We are doing all we can to find the perpetrators who desecrated this final resting place, and they will be prosecuted to the fullest extent of the law. Hate is not permissible in Philadelphia. I encourage Philadelphians to stand with our Jewish brothers and sisters and to show them that we are the City of Brotherly Love and Sisterly Affection."