Synthetic drug causing concern as it gains popularity in the Valley 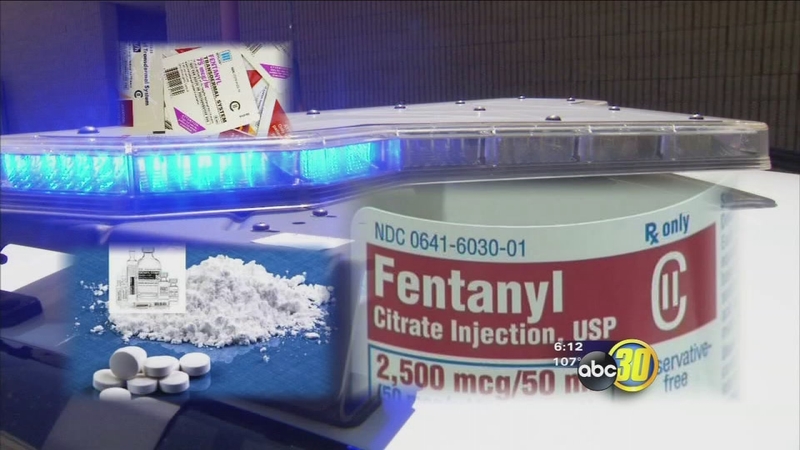 Synthetic drug causing concern as it gains popularity in the Valley

FRESNO, Calif. (KFSN) -- A popular synthetic drug is sweeping the nation and now showing up in the Central Valley. It's a crossover drug for many heroin users, but even more powerful. Fentanyl came out of the shadows and into the headlines when investigators determined Prince died of an overdose of the drug back in April.

There's a prescription version and also a more potent type being cooked up by street dealers. Fentanyl is one of the fastest-spreading drugs on the streets and is so dangerous just touching it can cause the heart to stop.

An undercover deputy told us, "They thought they were dealing with powdered heroin, but when the lab came back with results on the substance in the bag it turned out to be fentanyl."

Doctors typically prescribe the powerful painkiller to cancer patients or those terminally ill who have become tolerant to other drugs like oxycodone or morphine. Black market synthetic fentanyl use to be primarily imported into the United States, but now it's being cooked up in drug labs across the country.

Fentanyl is a crossover drug for many heroin users, but even more powerful.

A Fresno County Sheriff's deputy works the streets undercover. He investigates the most popular drugs in the Central Valley methamphetamine, heroin, and now-fentanyl.

"The new concern for us right now is that synthetic opioids are going to take over that market, and it seems they are quickly doing that," said the undercover deputy.

The current trend many law enforcement officers are seeing is 18 to 25-year-olds getting hooked on prescription pills then moving onto the faster-acting heroin.

"As the government cracked down on these pharmacies for lack of regulations upon them. The transition naturally was from the expensive prescription pill that was ballooned up to $40 a pill is, I can go score $20 of black tar heroin which will get me higher more frequently," said Corporal Frank Martinez, Hanford PD.

Local police officers said the next step for many is the highly euphoric, but dangerous drug fentanyl. The drug is so powerful, it's prescribed in micrograms. It can be up to 100 times stronger than morphine and 30 to 50 times more potent than heroin.

"That line between being under the influence and overdose sometimes gets small," said the undercover deputy.

Scared into sobriety is often what it takes for young users to check into rehab. According to Shawn Jenkins, of the drug treatment facility Westcare, seeing another person overdose, or someone's parents catching on, are common circumstances that lead addicts through their doors.

"We have seen a rise in that age group, and so, especially a lot of people that are coming from the methadone clinic and needing residential treatment as well, because they can't stay clean or they want to kinda detoxify. And so, they need a safe and secure environment to do that in."

Law enforcement officers face a threat every time they encounter any white powdery substance---that could be fentanyl. The Fresno County deputies who came across it last month never touched it or even opened the bag. Fentanyl is transdermal and its effects can be absorbed through the skin.

"Had they tested that powder in the field they would've exposed themselves to it, and quite possibly, gotten sick or hospitalized because of it," said the undercover deputy.

Fentanyl is powerful enough to shut down both the central nervous and respiratory system in seconds. That's why the those who handle drugs at the Fresno County Sheriff's Office now carry Narcan-- a counteractive drug that immediately reverses Fentanyl's effects.

It's becoming so common that even the Fresno County Sheriff Coroner's Office is now routinely testing for fentanyl as part of their drug screen.

Young users or those without much drug experience are mixing fentanyl with other things like alcohol. Some just underestimate its power. Others are never even aware that what they are using is laced with fentanyl or pure fentanyl.

Health officials and law enforcement are concerned, the Valley could see a dramatic spike in overdoses simply because users are playing Russian roulette with a drug they don't even know has the power to kill with one hit.