Wide receiver makes the catch of a lifetime: Child thrown from burning building

Phillip Blanks played wide receiver in college but his greatest catch was to save the life of a child thrown from a burning building.
KFSN 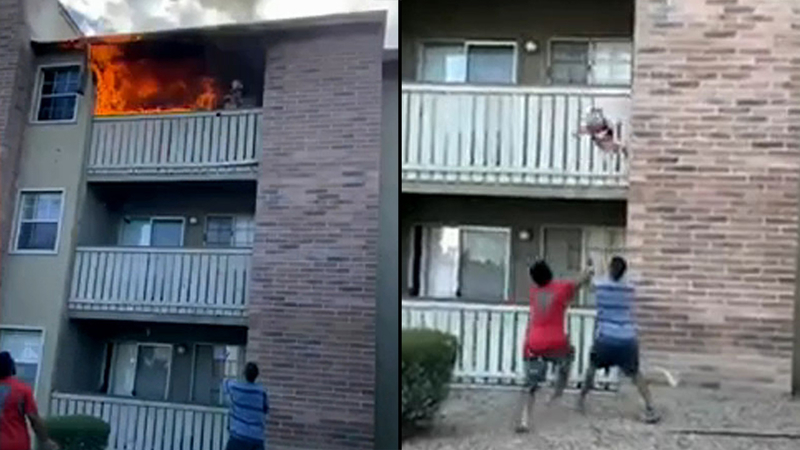 Phillip Blanks played wide receiver at a college in Southern California, but the greatest catch he ever made in his life came long after his playing career ended.
Heart-stopping video shows Blanks diving to catch a 3-year-old boy thrown off the balcony of a burning building in Phoenix on July 3.

"Instinct. There wasn't much thinking. I just reacted. I just did it," he told our sister station KABC-TV in recalling the moment.

Another nearby family was forced to throw their son and dog to safety as their unit burned down as well.

Phoenix police said the two children rescued from the first unit have serious but non life-threatening burns. The children's 30-year-old mother died in the fire. Their father was at work when the blaze broke out.

The cause is still under investigation.

Blanks, 28, said he was raised with the mindset of always looking to help others. He served in the U.S. Marines and now works in the security industry.

And, of course, his time as a wide receiver at Saddleback College in Orange County, California, was a big help.

Phillip Blanks played wide receiver at a Southern California college but his greatest catch was to save the life of a child thrown from a burning building.

"I know how to catch," he said. "I've learned how to catch a football. So I'll give some credit to football."
Blanks said he was home when he heard a lot of commotion outside his building. Thinking perhaps there was a fight or some other disturbance, he went to look.

Then he heard someone yell about a fire and ran outside barefoot.

He immediately focused on the patio, saw what was about to happen, and ran up just in time.

"He was twirling in the air like a propeller," he said. "I just did my best. His head landed perfectly on my elbow. His ankle got twisted up as I was diving. The guy who was there with me -- it looked like he wasn't going to catch him. So that's why I stepped in. I just wanted to make a better catch."

But Blanks said the children's mother is the real hero of the story.