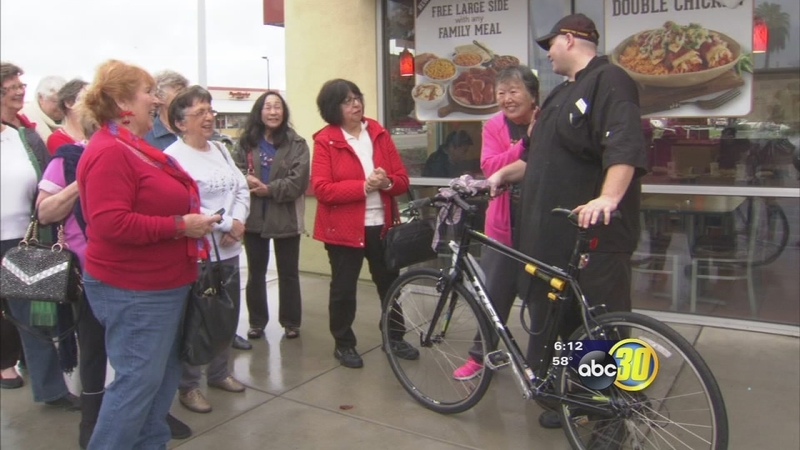 FRESNO, Calif. (KFSN) -- A Fresno man who wears several hats at the Clovis El Pollo Loco has formed a special bond with a group of women that visits the restaurant every week.

And just in time for Christmas, the ladies organized a sweet surprise for the deserving father. Each week, it's tradition for Shane Cory to walk his favorite customers out after their meals.

A Fresno father of two had a surprise waiting outside for him Tuesday afternoon, a brand new set of wheels.

The ladies known as "The Golden Girls" have become good friends with Cory over the past year-and-a-half. So much so they call him their adopted grandson. "Both my grandmas have passed," Cory said. "So they're my surrogates. All my surrogate grannies."

This bunch of about 20 women from Fresno and Clovis all met years ago while taking yoga. The El Pollo Loco on Shaw Avenue became their favorite place to meet up and eat, and especially after Cory got hired. "When he started taking over for us, our orders," Julie Kiser of Clovis said. "It was snap, snap efficient."

Cory says he takes pride in the work he does as a cashier and as a cook. And every single day, for his Monday through Friday shift he gets to the restaurant by bike. "He travels 14 miles a day, Kiser said. "Back and forth whether hot or cold, rain doesn't matter he goes."

When one of the "Golden Girls" noticed his old bike was falling apart, they decided it was time for him to get an upgrade.

"Can't we go ahead and get him a new saddle?" Cory's friend Val Bland asked. After that, it went to a whole bike."

An appropriate gift for the man who is simply following the golden rule.