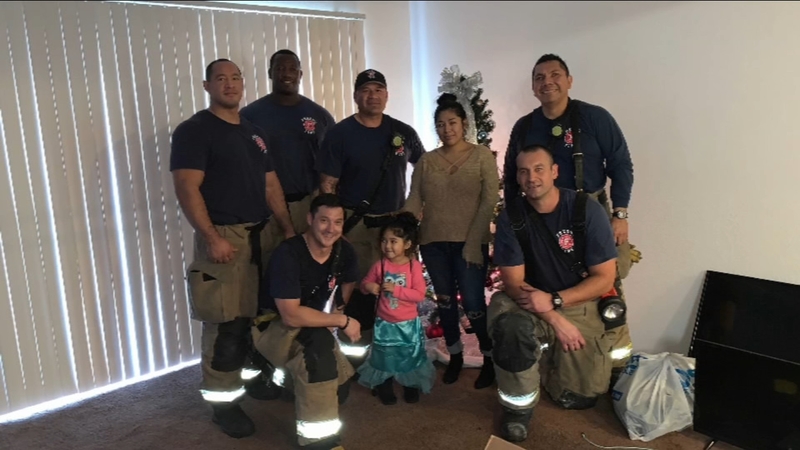 FRESNO, Calif. (KFSN) -- It's a photo worthy of next year's Christmas card and something this mother and daughter are thankful they can look forward to.

They may be all smiles posing by the tree, but just a few hours before this picture was snapped fire crews were pulling this little girl from a second story window after their apartment caught fire.

"There were screams coming out of the apartment and a mother and daughter were trapped inside," said Battalion Chief Tony Escobedo.

It was 10 30 a.m. on Monday morning when fire crews were called to the apartment complex on Winery and Lane.

"Because the fire was so close to the exit and there was so much smoke they couldn't get out or breathe," said Chief Escobedo.

Fresno Fire crews were able to bring both mother and daughter to safety and quickly knock out the flames before spreading to adjoining unit. Battalion Chief Escobedo says they wanted to do more.

"My crews came up to me and said hey chief can we find another apartment for her," he said.

Thankfully the complex manager was able to find them a unit just two buildings over.

In an effort to make sure mom and her little girl didn't have to suffer any more, "We spent about two hours moving her beds, her refrigerator, her food, got her from one apartment to the next," Escobedo said.

Our holiday heroes even made sure the Christmas decorations made it to their new place.

"The little girl that was initially in shock crying because of the fire, but later on was happy and giving the firefighters high fives," he said.

And with those high-fives came a little instruction.

"As a matter of fact she got a little bossy she was telling us where she wanted the Christmas tree and all the presents laid," Escobedo said. "I even heard her say firefighters were her favorite so that made our day."