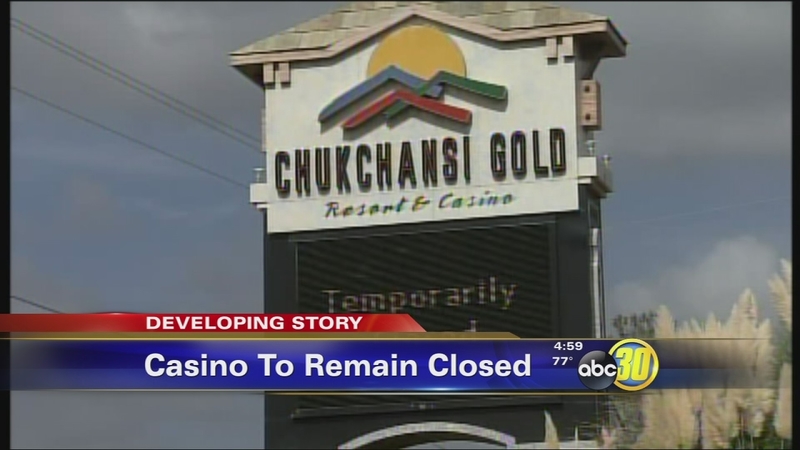 FRESNO, Calif. (KFSN) -- A judge has ruled Chukchansi Gold Resort & Casino will stay closed for at least two more weeks. And now fears are growing about the financial impact across Madera County.

The Chukchansi shutdown is raising financial fears across Madera County. The workforce assistance center says in the past few days it received 40-50 inquiries from casino employees worried about losing their jobs. But with so many questions about the fate of the facility, it's been difficult to give them answers.

David Rogers said, "When you think of 1300 people employed, that's a large payroll."

Madera County Supervisor David Rogers says he's concerned about those workers, plus the million dollars a year the casino is required to give community organizations, and the additional money it contributes to the general fund.

"Chukchansi provides $1 million 67 thousand dollars every year for police and fire," said Rogers. "But if they're not making any money I doubt really seriously we're going to see any of it."

Surrounding businesses are also worried about losing even more customers after recent wildfires scared many tourists away.

Diane Boland said, "It's like another disaster happening to our area."

Boland owns the Coarsegold Historic Village. She's holding a free Halloween-themed tarantula festival here on October 25th but says it's been difficult getting prizes donated for the kids because many people are already tightening their purse strings.

"When you don't know if you're going to be employed for six months of you don't know that anyone is going to come shop at your store you really have to watch out for the future."

But Boland and other business owners say they'll do everything they can to keep their community from becoming a ghost town.

Delight-Ful Treasures Co-Owner Danielle Kissee added, "We were talking about that today trying to come up with other ideas of how to generate business for our store, doing rentals for weddings, parties that sort of thing."

About 50 employees will be allowed to work, and they will be paid. But it's still not clear what will happen for more than 1,200 others. A hot line has been set up for employees to help answer some questions.

In the court room Judge Lawrence O'Neil made it clear it was not within his power to reopen the Chukchansi Gold Resort & Casino, he did maintain his restraining order amid preventing further violence and allowed a limited amount of internal business to resume. And he ordered all factions to start talking to each other.

Reggie Lewis, the chairman of one of the tribal factions was encouraged.

Lewis said, "The judge knows what he is talking about and I think we are on the way to getting this settled."

The judge's ruling allows Louis and his faction to remain on the 11th floor of the casino with the power to keep the building open and pay the bills, especially the monthly payments to tribal members. The other tribal chairman Tex McDonald who armed takeover of the casino caused this crisis had no comment as he left the courthouse. Meantime, casino employees are now just hoping for the best.

Casino employee Felicia Graham said, "I just hope they're going to try and resolve this so most of us employees can get back into the casino because a lot of us are missing out on money right now we need to get paid we got bills to pay."