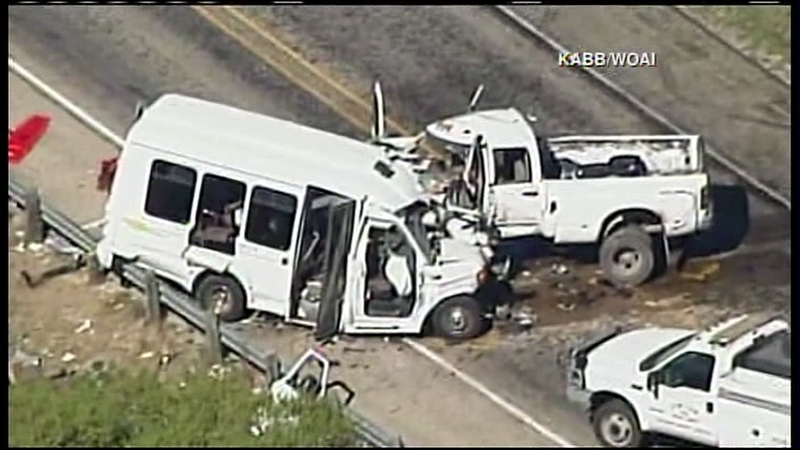 CONCAN, Texas -- Thirteen people were killed and several injured in a traffic accident involving a church vehicle in central Texas, authorities have confirmed.

According to DPS, the church bus was traveling south on Highway 83 near Concan, Texas, when it was involved in a head-on collision with a Dodge pickup truck.

The bus was carrying 14 passengers from First Baptist New Braunfels, but only a driver was aboard the pickup truck. All of the victims who died were senior adults who attended the church.

Photographs and video from the scene showed heavy damage to the front drivers' sides of the small white bus and pickup truck, which are the portions of the vehicles where they appear to have collided. The back of the bus was up on a guardrail and debris was scattered onto the grass below.

The crash happened about 12:20 p.m. Wednesday outside Garner State Park, about 75 miles west of San Antonio.

Church officials told ABC News the van was returning to New Braunfels from a Baptist encampment near Leakey, Texas, where members were attending a Bible study.

In a statement, Governor Greg Abbott extended condolences to the victims and their families.

"We are saddened by the loss of life and our hearts go out to all those affected," Abbott said. "We thank the first responders working on the scene in the wake of this unimaginable tragedy, and ask that all Texans join us in offering their thoughts and prayers."

The church posted the following message to its Facebook page:

We have received word that the bus carrying our senior adults back from their retreat was involved in an accident. We understand there have been some fatalities, but we do not yet know who. All activities for tonight are cancelled. The Sanctuary will be open this evening for prayer and support. Please be in prayer for all involved.