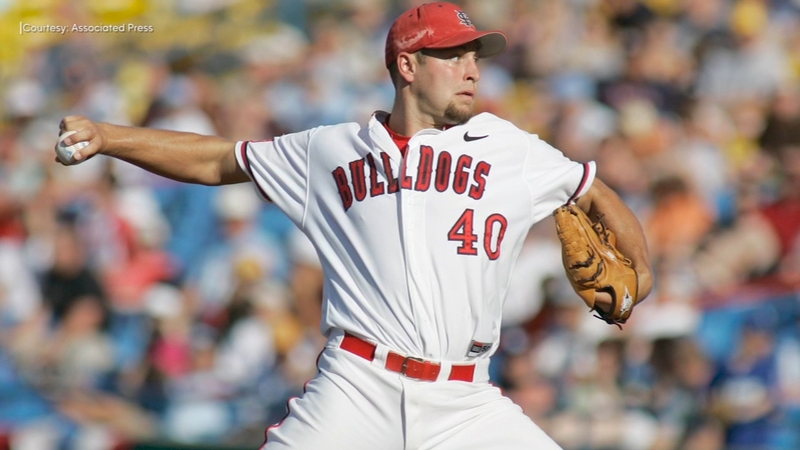 FRESNO, Calif. (KFSN) -- Twelve years: That's how long it's been since one of the greatest sports moments in Fresno's history.

"It was a lifetime ago, that's what I remember," he said. "But it's still pretty amazing. You know, even nowadays, we'll be on the fire engine here in Fresno, and I still see people wearing that shirt."

You might recognize him from that fabled Fresno State baseball championship team - or maybe, from his post-baseball career of firefighting.

That passion actually began while the Visalia native was getting ready to throw heat for the Dogs.

"In the summer of 2007, after I had started college baseball at Fresno State, I got the opportunity to go and work for the Forest Service up in Oregon," he said. "I really enjoyed my time I got to work in it that team atmosphere and, you know, knew once baseball ended for myself, that would be an awesome career choice to go with."

After that summer, all Allison did was record the best win-loss record for a Bulldogs pitcher in 2007 - and then we all know what happened in 2008.

"That time in particular brings back so many memories," he said. "The community came together extremely well and baseball was big there."

Allison graduated after the championship and did some time in baseball's minor leagues - later deciding to pursue firefighting full-time - and eventually landing with another team-oriented group in Fresno - the Fresno Fire Department.

"There's just a certain feel that you get, there's a certain personal growth and team growth that you experience and that for me was really what drew me into it to excel in something," he said.

More than 12 years after his team took Fresno to the promised land - he's on a new team now - protecting the city and Valley he helped bring a championship to.

"To relive some of those images and work in some of the same areas that are in around the college, so it's been it's been awesome," he said. "I couldn't ask for anything better."
Report a correction or typo
Related topics:
sportsfresnobulldog breakdownfresno state bulldogs
Copyright © 2021 KFSN-TV. All Rights Reserved.
BULLDOG BREAKDOWN
Chatting with football coach Kalen DeBoer about game against UNLV
Cam Worrell breaks down important plays from Fresno State-UNLV game
Bulldog Breakdown: Highlights of Fresno State v UNLV game
Meet the Bulldog: Jordan Lau
TOP STORIES
Sierra Unified board votes to keep mask mandate for students and staff
Tulare County offering shelter to animals evacuated due to fires
Memorial held for Hanford marine killed in WWII after remains found
New evacuation warnings issued as Windy Fire grows
CA to mail every voter a ballot in future elections
Flames break out at abandoned tire shop in southeast Fresno
A mother's memories as trial starts in Old Fig murder case
Show More
R. Kelly found guilty on all counts in sex trafficking trial in NYC
California to replace the word 'alien' from its laws
Community Medical Centers sues Santé, surgeons for alleged 'walkout'
Biden receives COVID-19 booster shot
#18 Fresno State readies for game with no fans in trip to Hawaii
More TOP STORIES News