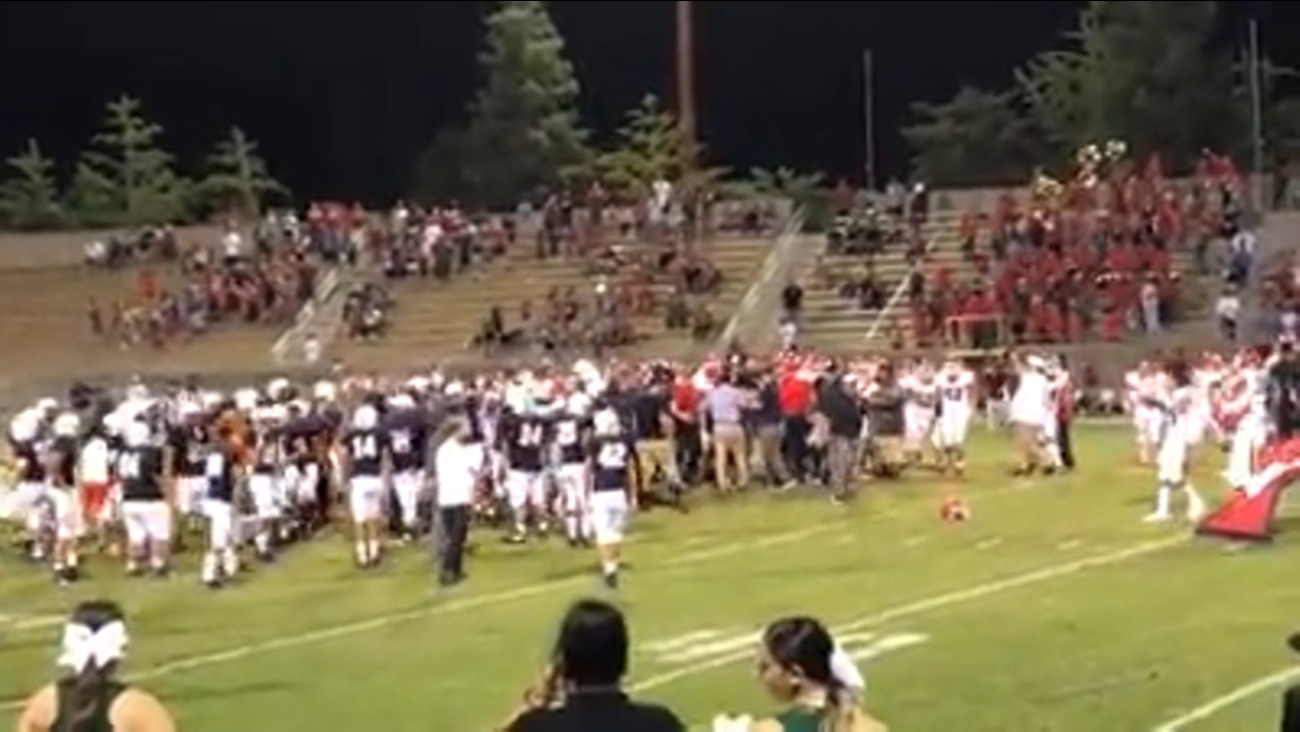 A lack of sportsmanship was captured on video between Clovis East and Sanger High immediately following Thursday night's football game at Lamonica Stadium.

Sanger defeated Clovis East 21-14, but after the final whistle, Sanger players ran to the middle of the field and attempted to plant a team flag into the ground.

The actions caused a lengthy brawl between both teams.

Clovis East players reportedly did the same thing last year in Sanger without a fight breaking out as a result.

An embarrassing lack of sportsmanship here at Lamonica tonight as Sanger defeated Clovis East 21-14 and immediately attempted to place a flag in the field, prompting a lengthy fight between both sides. pic.twitter.com/Oaa2GRR5dj

Action News has sent emails to Clovis and Sanger Unified about the incident.

The incident that occurred at the conclusion of last night's game was unfortunate, and is being reviewed by site staff. We are working closely with Clovis Unified School District to ensure such incidents are avoided in the future as the safety of all students, and anyone attending any district event remains a top priority.

The safety of our student athletes is always a top priority, along with the safety of anyone in attendance at district events. The disruption that erupted at the conclusion of last night's Clovis East vs. Sanger game is very discouraging because it jeopardized both of those priorities. Athletics are a great venue to teach kids the sometimes difficult lessons of how to lose and how to win with both dignity and sportsmanship.

In our district, we are investigating the incident to identify any students from our school who may have violated school rules, and who would therefore face possible disciplinary consequences. Those consequences can range from a direct conversation, to suspension from the team or even from school if the facts are found to warrant it. We are also working closely with the Sanger Unified administration to ensure incidents such as this are avoided in the future. We value our relationship with Sanger Unified School District and want this positive and competitive relationship to continue in an environment of safety and good sportsmanship. An "official" officials report was submitted to both schools regarding the incident. Be assured, the behavior last night is unacceptable to us, and we will take every avenue available to reiterate our standards for behavior and sportsmanship with our students and teams against whom we compete in the future.
Report a correction or typo
Related topics:
clovissangerclovisfightsangerhigh school football
Copyright © 2021 KFSN-TV. All Rights Reserved.
FIGHT
Fresno State coach speaks out after fight at Bulldog Stadium
Arrests made after violent fight breaks out at Fresno State game
100 kids break out in massive fight at Six Flags Discovery Kingdom
39-year-old accused of attacking 2 with ax in Visalia
TOP STORIES
Fresno State announces return of Jeff Tedford as head football coach
Scott Peterson resentenced to life for pregnant wife's murder
Plan unveiled for CA to be abortion sanctuary if Roe overturned
Fresno teacher gets millions of views on TikTok with dance moves
Series of storms to bring rain, snow to Central CA
Family of 5 from Fresno killed in shooting in Mexico
Man hospitalized after hit-and-run crash in central Fresno
Show More
Michael Strahan's Blue Origin space flight pushed to Saturday
Pfizer says COVID booster offers protection against omicron
Californians cut water use 13% in October; still behind goal
Gunmen on jet skis open fire into the air at beach near Cancun hotel
Andreas Borgeas will run to replace Devin Nunes in Congress
More TOP STORIES News