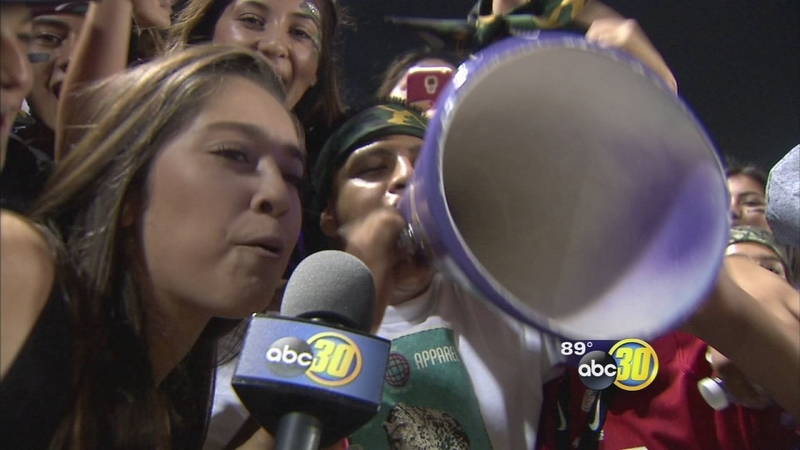 "The district is looking to reschedule cancelled football games during upcoming bye weeks," said an automated phone call from FUSD.

"I know we've pushed back games, started games a little bit later, but I don't think we've ever had a cancellation of all the games, so this is a first for our area actually and it's all due to the rough fire," said Brett Mar, interim co-interim athletic manager for FUSD.

Donning a protective mask, the stadium manager at McLane High School picked up the cones along the sidelines and closed the gates.

Even schools like Washington Union in Easton decided to call off their week two matchups.

"We want to applaud those schools throughout the Valley that cancelled the sporting events today and tomorrow," said Valley Air District Communications Officer Jaime Holt. "We really think that was a wise decision."

Holt says heavy smoke, soot, and ash hasn't been this bad since 2008, and it's even worse in Fresno, Madera and Tulare counties.

But the lights were on in some parts of the South Valley, as Lemoore hosted Buchanan.

"As you can see we have a lot of fans out here, we want to put on a show for them," Percell Wilson said.

"This morning I woke up on my way to work (and) on top of my car -- just ashes, and I'm like what's going on," said Lemoore fan Jennifer Christensen.

"It's a little bit better," said Terrel Keel. "We can stand it."

But even if you can stand it, officials say to try to avoid being in it.

"Stay indoors, see their doctor if they need to, and really be aware of the fact that it's pretty nasty out here," Holt said.

The Valley Air District hopes a low-pressure system combined with some strong winds will move some of this smoke out of the Valley over the weekend, but they say nothing is guaranteed.

They also say that the smoke starts to settle closer to the ground at night. So they say not to be surprised if you have a sore throat or raspy voice when you wake up Saturday morning.