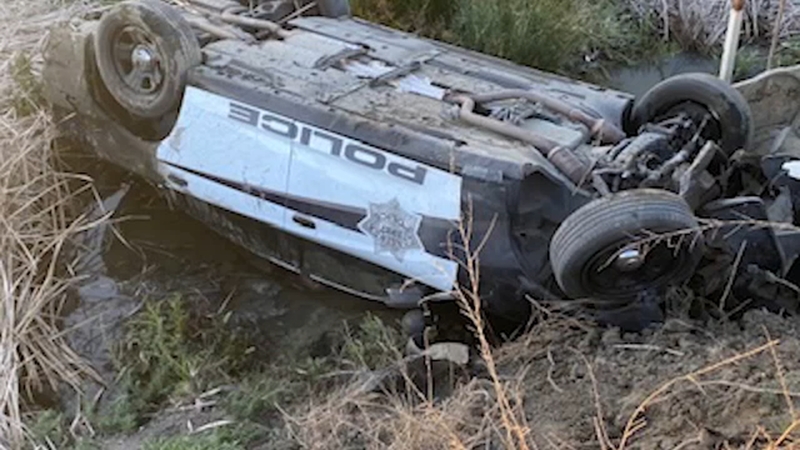 COALINGA, Calif. (KFSN) -- Coalinga Police Department Officer Travis Johnson initiated a pursuit around 6:30 pm on May 14, after trying to stop a man suspected of stealing a vehicle in Coalinga.

The chase spanned around 25 miles with speeds, at times, reaching 90 miles per hour.

But, as the suspect crossed Highway 41 from Nevada Avenue, just southwest of Stratford, he lost control of his vehicle along a dirt road.

It kicked up dust, temporarily blinding Officer Johnson who was following close behind.

As Officer Johnson came out of the dust cloud, he crashed right into a drainage ditch and landed on his roof.

"In my mind I thought, 'Ok this is it. I'm going to die today,'" Officer Johnson said.

But he didn't die. He called for help, unbuckled himself and crawled out of the passenger door.

He climbed out of the ditch, helped by his fellow officer, and got right back to work.

The suspect, identified as Richard Hernandez, was taken into custody and booked on multiple charges including violation of parole, vehicle theft and DUI.

Officer Johnson said he's learned to give suspect vehicles more space so dust doesn't put him in the same situation ever again.

But he says he's also learned to make every day count.