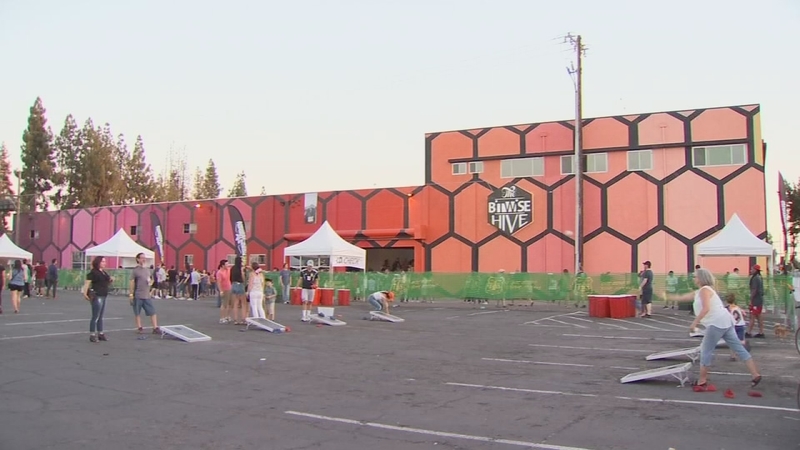 More than 3,500 people were drawn to the Bitwise Hive grand opening event. The celebration featured live music, DJ's, food trucks and tours of one of the most talked about buildings in Downtown Fresno.

Co-Founder and CEO Jake Soberal says, "It's neat to see you can cast a vision about what's possible in Downtown Fresno. You do a bit to support it and then people come and do awesome stuff with it. What that means for our city is really extraordinary and we're really excited to be a part of it."

The Bitwise Hive made it's public debut Saturday night. The company renovated the old county records building. The 50,000 square foot space is now home to 24 companies, not only limited to technology. You can tell by the futsal courts that got attendees excited to jump in on the action.

Just as exciting as the opportunity Bitwise is bringing to downtown is the celebration.

"It's now viable you can do your wildest dreams through Fresno. Equally as important for the City. This is the sort of night we imagine in Portland, but we don't believe is possible in Fresno. It's clearly possible in Fresno," says Soberal.

Bitwise industries opened the first campus in the Mural District in 2013 and has since seen steady growth with the South Stadium in 2015, and Hotel Virginia in 2017. The Bitwise Hive marks the fourth campus for 2018--all in downtown buildings that sat vacant for decades.

Soberal says, "We feel we've been missing that innovative inspiring venue that you can make out of these old buildings. So for us, the ability to come and do that and have an industry that backs us in getting there and filling that building has been extraordinary.

There are two other buildings in the works that we will see in 2019--Bitwise 41 and Bitwise at State Center Warehouse.