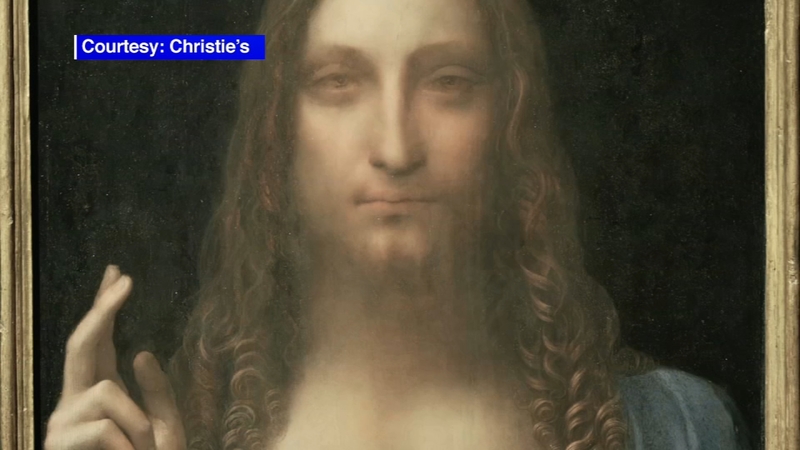 NEW YORK -- A painting of Christ by the Renaissance master Leonardo da Vinci sold for a record $450 million (380 million euros) at auction on Wednesday, smashing previous records for artworks sold at auction or privately.

The painting, called "Salvator Mundi," Italian for "Savior of the World," is one of fewer than 20 paintings by Leonardo known to exist and the only one in private hands. It was sold by Christie's auction house, which didn't immediately identify the buyer.

"'Salvator Mundi' is a painting of the most iconic figure in the world by the most important artist of all time," said Loic Gouzer, co-chairman of post-war and contemporary art at Christie's. "The opportunity to bring this masterpiece to the market is an honor that comes around once in a lifetime."

The highest price ever paid for a work of art at auction had been $179.4 million (152 million euros), for Pablo Picasso's painting "Women of Algiers (Version O)" in May 2015, also at Christie's in New York. The highest known sale price for any artwork had been $300 million (253 million euros), for Willem de Kooning's painting "Interchange," sold privately in September 2015 by the David Geffen Foundation to hedge fund manager Kenneth C. Griffin.

A backer of the "Salvator Mundi" auction had guaranteed a bid of at least $100 million (85 million euros). The bidding opened at $75 million and ran for 19 minutes. The price hit $300 million about halfway through the bidding.

People in the auction house gallery applauded and cheered when the bidding reached $300 million and when the hammer came down on the final bid, $400 million. The record sale price of $450 million includes the buyer's premium, a fee paid by the winner to the auction house.

"We are extremely pleased with the record-breaking result for this remarkable and historical work," Gouzer said.

The 26-inch-tall (66-centimeter-tall) Leonardo painting dates from around 1500 and shows Christ dressed in Renaissance-style robes, his right hand raised in blessing as his left hand holds a crystal sphere.

Its path from Leonardo's workshop to the auction block at Christie's was not smooth. Once owned by King Charles I of England, it disappeared from view until 1900, when it resurfaced and was acquired by a British collector. At that time it was attributed to a Leonardo disciple, rather than to the master himself.

The painting was sold again in 1958 and then was acquired in 2005, badly damaged and partly painted-over, by a consortium of art dealers who paid less than $10,000 (8,445 euros). The art dealers restored the painting and documented its authenticity as a work by Leonardo.

The painting was sold Wednesday by Russian billionaire Dmitry Rybolovlev, who bought it in 2013 for $127.5 million (108 million euros) in a private sale that became the subject of a continuing lawsuit.

Christie's said most scholars agree that the painting is by Leonardo, though some critics have questioned the attribution and some say the extensive restoration muddies the work's authorship.

Christie's capitalized on the public's interest in Leonardo, considered one of the greatest artists of all time, with a media campaign that labeled the painting "The Last Da Vinci." The work was exhibited in Hong Kong, San Francisco, London and New York before the sale.

In New York, where no museum owns a Leonardo, art lovers lined up outside Christie's Rockefeller Center headquarters on Tuesday to view "Salvator Mundi."

Svetla Nikolova, who is from Bulgaria but lives in New York, called the painting "spectacular."