Take a look back at the history of Fulton Street 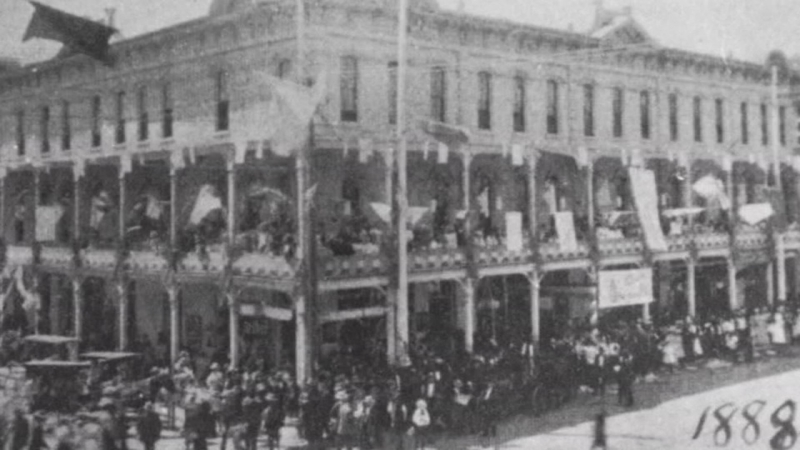 Take a look back at the history of Fulton Street

FRESNO, Calif. (KFSN) -- Like many western cities, Fresno was centered at its railroad. One photo was taken in 1875, three years after the city founding, J Street, just two blocks from the railroad had homes and churches. But as Ruth Lang of the Fresno County Historical Society tells us, was on its way to becoming the city's commercial center.

"The beginnings of certain businesses, stores, saloons, banks, retail establishments, restaurants and so on. You can see it forms a little bit more here this is in the 1880's and everything was just dirt street, wooden sidewalks, very western, very rustic at this time."

In 1880, the first big hotel, the Grand Central, was built on the corner of Mariposa and J Street. San Francisco real estate investor F. G. Berry bought the hotel and became one of Fresno's leading citizens and most colorful characters.

Craig Scharton, CEO of the Downtown Fresno Partnership, said, "He was a man about town they would have said in those days. Very flamboyant, very fun, very gregarious, everyone liked him. He was very popular and well known in San Francisco."

Berry was so beloved that when he died in 1910, J Street was re-named for him-- not Berry street, but Fulton, for his first name.

Fulton's Grand Central Hotel, like many Downtown buildings, went through changes. In the 1930's the wood porches were taken down, in the 1960's it was plastered over to look like a modern building. A model of the original hotel was made by John Rupe, who's made scale models of many of the historic buildings on Fulton.

Fulton Street thrived through the 20's, 30's, 40's, and 50's. But by 1960 business was moving north. That's when many of the historic buildings were torn down or re-faced to look new, then, the most dramatic change. Development of the Fulton Mall hailed in a promotional film as the key to the rebirth of the city.

The Fulton Mall was designed by landscape architect Garret Eckbo, also a designer of the shopping malls. The mall started to fail in the 1970's as stores and shops closed or moved north to shopping malls.

Different city administrations tried to find solutions-- mayor Alan Autry wanted a river walk. But Mayor Ashley Swearengin revived the push to reopen the mall to traffic and won the city a $16-million federal grant to pay for most of the work.

"Fulton is really a special place-- you have to drive to LA or San Francisco to see some of the same quality and density of historic buildings. There's nothing like it in the entire valley floor," said Swearengin.

Swearengin said her vision for a restored street is already paying off.

"A hundred million dollars in additional investment has come into this six-block area just since the council made the decision to open it back up to a street."

The hope is the future, will bring back the luster of the past.

"It really was the hub at that time, Fulton Street or the whole Fulton area was the place people came for entertainment, back in those days to see shows like this, to shop to enjoy restaurants, it really was a wonderful area," said

It remains to be seen if the spirit that Fulton G. Berry brought to dusty old J Street more than a century ago will come back to life.
Report a correction or typo
Related topics:
community & eventsfresno downtownfulton mallhistoryfulton streetfresno
Copyright © 2021 KFSN-TV. All Rights Reserved.
FULTON STREET