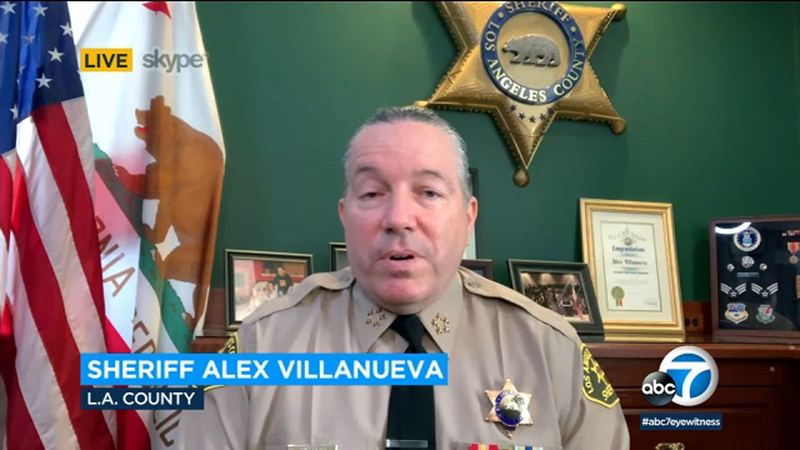 LOS ANGELES -- As the reward for the shooter grows to $300,000 one of the two Los Angeles County sheriff's deputies who were shot in Compton is out of the hospital, Sheriff Alex Villanueva said.

A 24-year-old male deputy has been released while the 31-year-old female deputy who was also wounded in the shooting remains in the hospital.

The two deputies on transit duty were shot as they sat in a patrol vehicle at the Metro station in Compton on Saturday. Their names have not been released, but both were sworn in just 14 months ago.

We at @LASDHQ appreciate the outpouring of prayers and support you have shown for our ambushed deputies.

Great news, one of those deputies was released from the hospital today. He has a long road ahead for recovery. But he's not alone. We, as a community, are in this together.

The prognosis for both deputies is good but they have a long road to recovery.

"We continue doing a wide-scale search and investigation on who is responsible for the ambush," Sheriff Alex Villanueva said. "We're chasing all leads. Right now it's a lot of work we have to do."

The lone shooter was seen on surveillance video walking up to the patrol vehicle, aiming a handgun at the passenger window and firing several shots. A short time later, the female deputy was seen inside a nearby building working to put a tourniquet on her injured partner even as she was bleeding from her own wound to the jaw.

The female deputy can be seen on surveillance video struggling to place a tourniquet on her partner even as she herself is bleeding from gunshot wounds.

Sheriff's officials say the massive law enforcement presence that was dispatched on Tuesday was for an armed carjacking suspect who has not been linked to the deputy shooting. The big presence was required because that suspect had previously wounded the carjacking victim with a high-powered rifle. That suspect was arrested and is being held in lieu of $2 million bail.

Not only has the reward offered for information leading to the shooter increased, but contributions to help the two deputies are pouring in from all over the country.

A GoFundMe page and an account set up by the deputies union have combined to raise more than $750,000 to help the wounded deputies.

Union president Ron Hernandez says the families of the two deputies are gratified by the support, but concerned about the message the shooting sends about public safety.

"They're overwhelmed by the amount of support because they equate that to thank yous for their loved ones doing their job, even though they've been injured," Hernandez said.