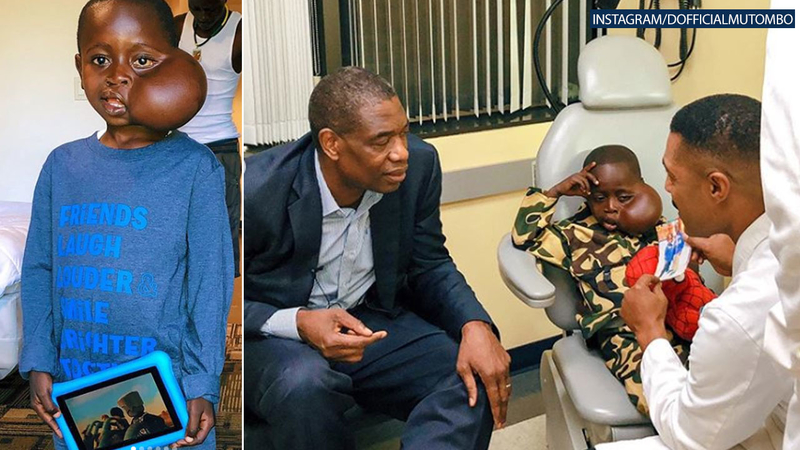 LOS ANGELES -- An 8-year-old boy who came to Los Angeles to have a massive tumor removed from his face died Friday night due to a rare genetic reaction to anesthesia, the Dikembe Mutombo Foundation said.

The foundation, which was created by retired NBA star Dikembe Mutombo, announced the news in an email Saturday morning.

Matadi Sela Petit arrived in Los Angeles with his father on Dec. 12 to undergo surgery to remove the growth from his face. The foundation and several other partners had sponsored the boy, who was born in the Democratic Republic of Congo. Before coming to the U.S., Matadi also had a cleft lip that was treated with help from the foundation.

During the surgery to remove the tumor, Matadi suffered a rare genetic reaction to the anesthesia. Despite the efforts of medical professionals, the boy never recovered and died.
"We are devastated by the loss of Matadi and our hearts go out to his father, his mother and the rest of his family, and all his old and new friends," the foundation said.
Report a correction or typo
Related topics:
societychildren's healthchildrentumorchild deathnbasurgerynonprofit
Copyright © 2022 KABC Television, LLC. All rights reserved.
RELATED
Boy from Congo, 8, undergoes tumor surgery in LA
Retired NBA Star helps boy with tumor on face
TOP STORIES
Fresno County firefighters carrying out water rescue in Caruthers
Fresno's food truck community comes together to support Planet Vegan
How Valley outdoor workers are coping with the extreme heat
Sanger community raising funds for Mexican restaurant hit by fire
You can beat the heat for free at these 10 Fresno pools this summer
At least 46 bodies found in 18-wheeler in San Antonio
Tax refunds for CA: Here's what's included in new relief package
Show More
3 dead, at least 50 injured after Amtrak train derails in Missouri
Abortion protections to be on California ballot in fall
Target, Walmart weigh paying you not to bring back unwanted items
Nelson Esparza dropping defamation lawsuit against Garry Bredefeld
Visalia police searching for missing 72-year-old woman
More TOP STORIES News