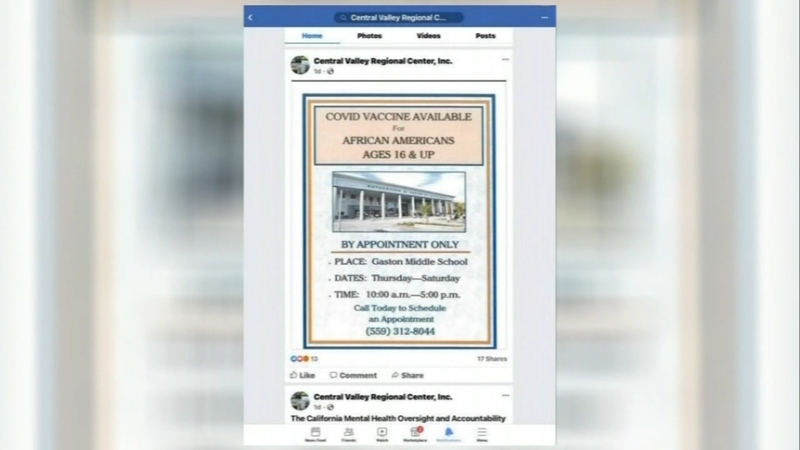 FRESNO, Calif. (KFSN) -- Good information is one of the most important tools in the fight against COVID-19.

Public health officials are finding out that addressing bad information is almost as important.

A flyer posted to Facebook over the weekend advertised vaccinations at Gaston Middle School for African Americans ages 16 and up.

It spread across social media quickly, with several people claiming discrimination against anyone who's not Black.

But the flyer was fake, the Facebook post is now deleted, and the site does not discriminate.

"The African American Coalition has been specifically tasked with outreach to the African American community, which is under-represented in the vaccination statistics statewide and in Fresno County," said the county's health officer, Dr. Rais Vohra. "So they do spend a lot of their time and resources doing communications and education to that population."

"And so that means we do have a very targeted approach," said Shantay Davies-Balch, the African American Coalition's director. "Targeted and universal. So that means, again, if you're 65 and plus we're going to serve you."

The school is in Fresno's 93706 zip code, where data shows COVID has made an outsized impact.

Health officials say high blood pressure, diabetes, and asthma are more prevalent here than in most of Fresno.

African Americans make up 13% of the zip code's population, about three times higher than in the city as a whole.

So even though a banner outside the school welcomes people to the African American COVID-19 vaccination clinic, the staff is ready and willing to serve anyone who meets the state's eligibility standards by age or occupation.

"We do have a diverse staff, so we are able to support folks in different languages," said Davies-Balch.