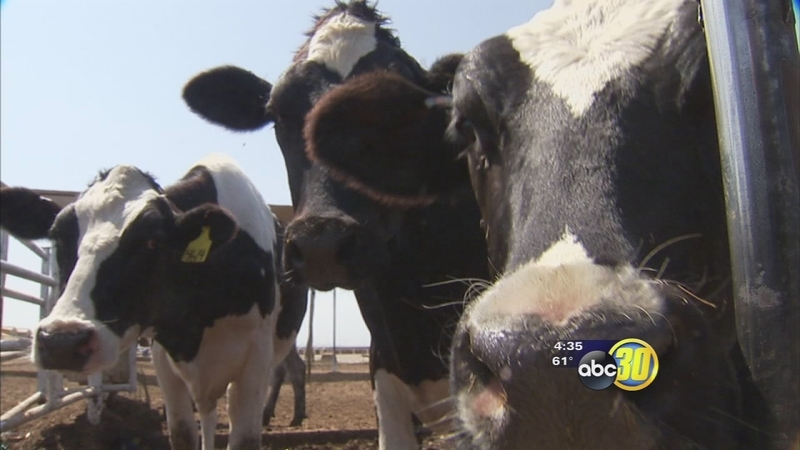 FRESNO, Calif. (KFSN) -- Thanks to an expensive piece of machinery, dairyman Eric Tevelde is now running his entire operation on recycled cow waste.

"We'd probably be paying between $50,000 and $70,000 a month. It covers all the electricity for both the dairy and our farming side of it so it's significant."

Significant enough to curb emissions of methane from cows while slashing his PG&E bill.

Tevelde does it with a machine called a digester and it is the future of the dairy industry. Basically it captures greenhouse gases from cow manure that would otherwise escape into the environment, gets stored under tarps, then converted into electricity.

"What a digester is is simulating a cow's stomach. It's still warm it's dark, there's no air, and the same bacteria that leave in a cow in the stomach will eat the little leftover calories in the manure and when they do that they admit methane gas. So all we're doing is encouraging a natural digestion process similar what already happens in a cow's gut," said Daryl Maas, Maas Energy Works CEO.

One of these cows will produce 100 pounds of manure on a day that is eight kilowatts-- enough power to run your home on a typical day.

The Tevelde family is one of the first in the state to turn manure into clean power, but hundreds more dairies will need digesters to comply with a new state climate change law.

Millions of dollars in grant funding will be awarded for installing dairy digesters over the next year.

"These projects take a lot of money and they take at least a year, sometimes two, to get on the power grid. That's a very slow process, but if you do it right is a very good mechanism for prioritizing the energy," said Maas.