'They both touched my life': Porterville firefighter shares memories of Patrick Jones and Raymond Figueroa 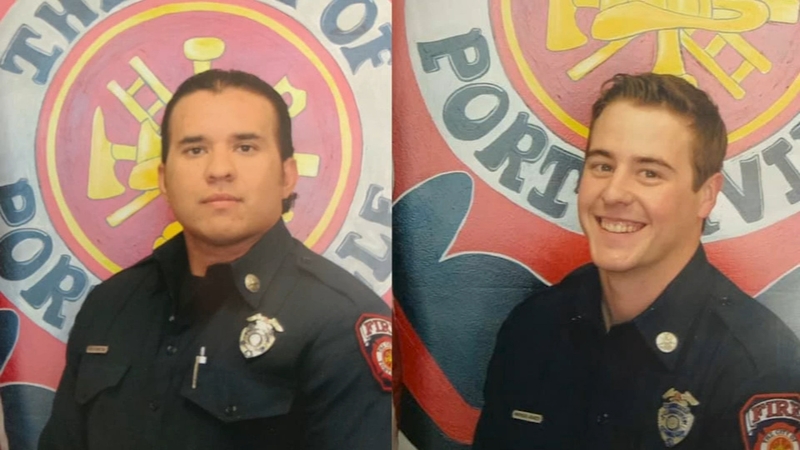 PORTERVILLE, Calif. (KFSN) -- Thursday will mark one year since an inferno at the Porterville library took the lives of 35-year-old Fire Captain Raymond Figueroa and 25-year-old firefighter Patrick Jones.

The men rushed into the burning building after it was reported someone was still inside.

That person had actually escaped, but after a Mayday call, Jones and Figueroa were never heard from again.

They were two of the best firefighters Coy Farnsworth ever knew.

"I feel really fortunate to have met both of them because I feel like they both touched my life in such positive but different ways," Farnsworth said.

He said Ray was skilled with tools, highly trained, and a mentor to younger firefighters like Patrick-who was eager to learn, always willing to lend a hand, and loved busting down doors (when he wasn't saving kittens).

"I don't think I've gone a day without thinking about them," Farnsworth said.

Farnsworth was off duty when he heard about a fire at the Porterville Library.

So he rushed to Station 71 to gear up, then walked around the corner to help attack the flames.

Within minutes he was given a new assignment: rescue Jones, who was inside the burning building.

Figueroa had just been pulled out by another team and was pronounced dead a short time later.

"It was the library, which is like an icon of Porterville for us, and then one of our guys was inside, so it was definitely different from all of the other fires I've had in the past," Farnsworth said.

Attempts to rescue Jones were unsuccessful that night - it took another day for crews to recover his body.

The department was devastated, but in the days that followed the tragedy, they were lifted up by the Porterville community, fire agencies from around the Valley, and one another.

Farnsworth admits he wondered whether he should stick with firefighting.

But he found new motivation in the memory of his friends, and one year later, he believes the Porterville Fire Department is more driven and focused than ever before.

"I've been saying from the get go, I really think that Ray and Patrick would have been pretty disappointed in me if I had let this break me," Farnsworth said. "Both of those guys were just so strong physically and mentally and I do what I can to live up to them, to live up to their ideals, and to their memory now."

The Porterville Fire Department will release a pre-recorded memorial service video on Thursday afternoon, exactly one year after the fire.

Action News will air some of the touching moments from that tribute.