"As we were hiking out, it got darker and darker until the sun was gone, the sky was a dark, dark grey," said Erik Levine.
KFSN
By Brianna Mellon 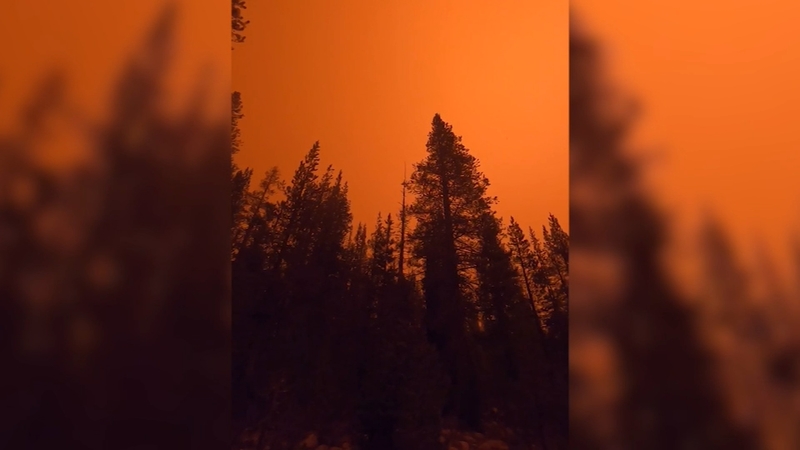 FRESNO, Calif. (KFSN) -- Erik and Caleb Levine are Eagle Scouts and avid backpackers. On Saturday morning, they hiked up to a ridge and noticed smoke; within the hour a giant plume cloud grew.

Erik Levine captured the footage on his GoPro.

"Really surprising there was a group that came in, Highway 168 was already closed, and they said 'oh yeah we took a back road and came in,'" Levine said. "So we thought if they didn't think it was too bad to take a back road to go backpacking, it must not be too bad for us."

Later in the day, they went fishing around Island Lake, and it started getting really dark. Ash began to fall and they decided they would pack up early and head out.

"As we were hiking out, it got darker and darker until the sun was gone, the sky was a dark, dark grey. We almost had to bring out our headlights that's how dangerous it was," Levine said.

They said the scariest part was they didn't know how close they were to the fire or what direction it was headed as the ash began to fall. They had no choice but to keep going straight to get back to their truck.

"We knew someone would come to get us if it was that bad, we had no idea how bad it was until we got into cell service. We started getting texts from people checking in on us and all these evacuation orders," said Caleb Levine.

When they made their way back out, they were stopped by a police officer. He told them to go in the opposite direction around the whole other side of the lake. Once there, they sat in a parking lot for three hours, waiting to be escorted down.

"Sure enough, there's 30 other cars down here, so we just got in line to be escorted down," Levine said.

The two are thankful to Fresno Police, who were walking around to each car, checking in, and offering water to them.