Many more fire evacuees will return to their neighborhoods for the first time tomorrow to see if their homes were destroyed or spared by the Creek Fire.
KFSN
By Brittany Jacob 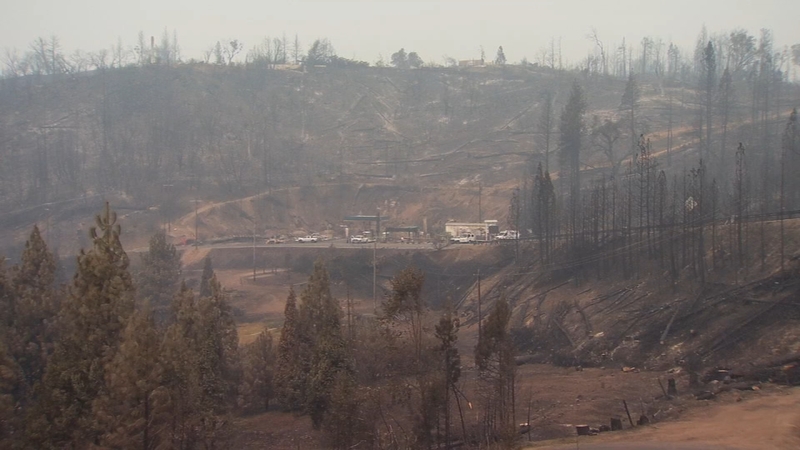 SIERRA HIGH SCHOOL, Calif. (KFSN) -- Creek Fire Captain PIO Chris Vestal and other fire crews want nothing more than to get people back in their homes safely.

As repopulation efforts continue, Vestal says there's no reported growth in the acreage of the Creek Fire.

"We are back to making good progress and we are holding the existing control and containment lines," he says.

On the virtual public briefing on Monday night, officials said there's been poor humidity recovery in combination with warmer temperatures.

But Vestal says they've had great visibility and were able to get aircraft up to drop both water and retardant.

"We always need our air resources and one of the problems we've had on this fire has been the visibility - that dense smoke layers and really that inversion that's prevented visibility where an aircraft can fly," he says.

Sometimes, fire officials actually have to let the fire burn in some areas.

"Our bulldozers and hand crews can't climb all the mountains and some of the steep terrain, so sometimes we have to push the fire out a little bit wider to get to the containment and control lines we want them to be at," says Vestal.

On Tuesday, residents at Huntington Lake will be allowed to access to their properties for the first time.

Vestal says he hopes for a sense of normalcy to return for those who had to evacuate.

"We want to give them that chance of being themselves again and quite frankly, nothing better for us than to leave this area at some point knowing that they are well on their way to resuming their life as normal as can be."
Report a correction or typo
Related topics:
fresno countymadera countydisaster reliefdisastercreek firewildfireweather
Copyright © 2021 KFSN-TV. All Rights Reserved.
CREEK FIRE
Investigators: Creek Fire cause formally categorized as 'undetermined'
Virtual silent auction being held to support Creek Fire victims
Innovations change the way wildfires are fought in CA
Most debris cleared from 2020's wildfire survivors' homes
TOP STORIES
3 killed in multi-vehicle crash in Tulare County
Police investigating deadly shooting in southeast Fresno
Fresno's Tower District gets biggest makeover in 60 years
Man killed, 16-year-old boy injured in Fresno County homicide
Bacon may disappear in California as pig rules take effect
Miss Winkles Pet Adoption Center reopens after 16 months
Driver, 2 passengers killed after car slams into tree near Caruthers
Show More
Mudslides force more than 100 to spend night on highway
Fresno's Boy Scouts go to camp
Woman hit and killed on Highway 99 in Fresno area
Federal eviction ban expires after Biden, Congress fail to extend it
Pedestrian hit and killed on Madera roadway
More TOP STORIES News