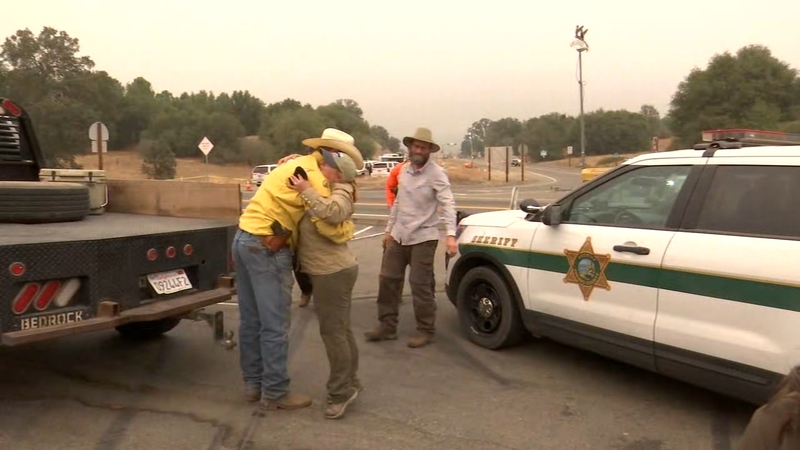 FRESNO COUNTY, Calif. (KFSN) -- After days of being trapped up in the high country, Fresno County sheriff's deputies escorted a group of 22 people stuck at Florence Lake and Edison Lake who had sheltered in place until deputies could get them through the path of the Creek Fire safely.

Cheryl Hurlbut said it was stressful trying to call out for help with little to no reception. Several members of the group were in need of medication.

"We felt very helpless being up there... (but) even though trapped, we were still safe," she said.

Cheryl says the hardest part was seeing the destruction on the way down the mountain.

A historic fire season has crews spread thin throughout the state.

The 1,800-strong crew working to battle the Creek Fire has already doubled in size since the start of the operation last Friday. But for an incident of this magnitude, that's still not enough.

"Normally we would have several 100 more firefighters on this incident. That said we are still able to meet all our priority objectives. We are still able to start increasing containment," said Capt. Chris Vestal of Sacramento Metro Fire.

Crews are taking advantage of favorable weather by creating and improving fire lines along the southeast and southwest portion of the fire.

"Just because we have done work doesn't mean that the number or the (containment) percentage increases. We don't get to call it contained until we are confident that the fire will hold at that line," said Vestal.

On Friday, it was dangerous work on one of the most sober days for our country.

Vestal admitted he and other firefighters are struggling emotionally as the world remembers the tragedies of 9/11. He said there's no better way to honor those that put their lives on the line that day.