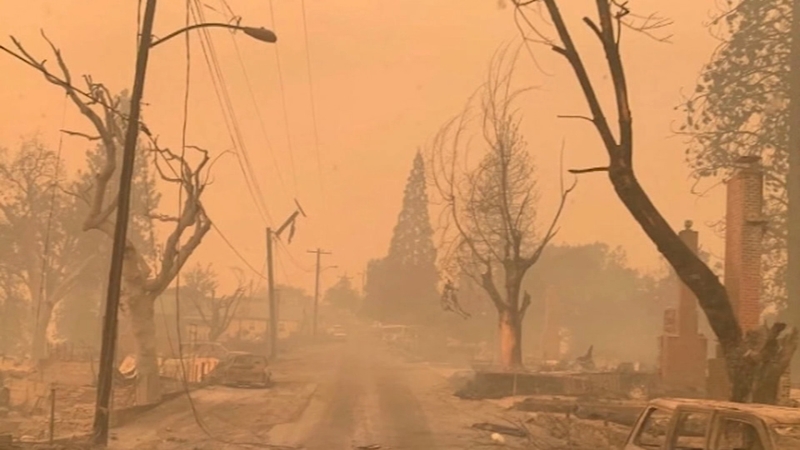 FRESNO, Calif. (KFSN) -- The forest service has confirmed that there is structure loss in the Big Creek area, however because of the unpredictable behavior of this fire, they can't send damage assessment teams to get a number of how many structures were lost.

As the creek fire ravages portions of Fresno and Madera Counties, the firefight intensifies.

Sandy Self and her daughter were spending the labor day weekend at their Shaver Lake cabin.

"I cried all the way home," she said.

Unsure of whether it's still standing, they said they wanted to show their thanks to first responders.

Big Creek was one of the first communities evacuated when flames erupted.


School superintendent Toby Wait spent the day picking up evacuees to house them. He says, "I've had reports that the school is still there. We lost about 30 houses of private residents."

His initial plans were to bring water and supplies to people who stayed behind, but was met with hard road closures as the fire prompted additional evacuations.
Wait adds, "People who lost everything are giving up anything they have. That's the type of community we have."

A sentiment Mark Coleman, of Fresno, can attest to. We spoke with him Saturday after he and his family were evacuated from their Big Creek cabin -- the place he calls his home away from home.

Coleman says he's spent years there. "We sail, we fish, we hunt, we horseback ride," he said.


Mark found out his cabin was destroyed by the flames.

Now his concern is with the community that embraced his family as their own.

Many of those people who lost everything are also bringing supplies to the command post for first responders. While they are appreciative they actually cannot accept them, so they're asking people to donate to the Red Cross.