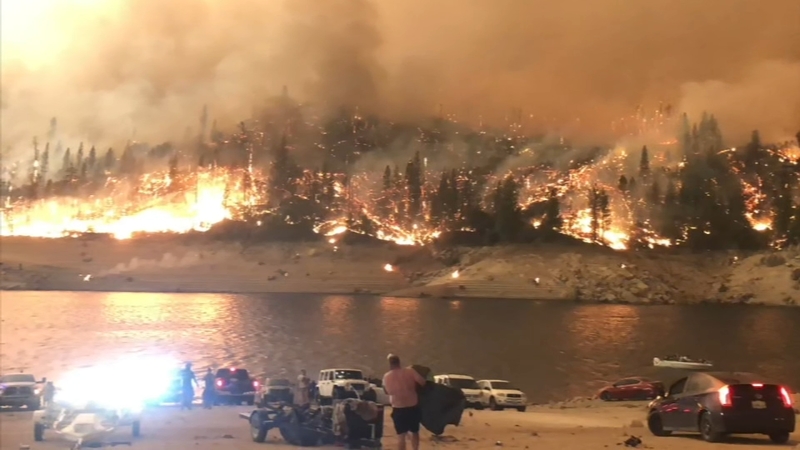 FRESNO, Calif. (KFSN) -- Friends and family members from Los Angeles returned to the mountains of Madera County on Tuesday for the first time since being rescued by a California Army National Guard Chinook at the Mammoth Pool reservoir on September 5.

Luis Mendizabal says, "By the time we saw the fire across the lake and within two hours, we were already surrounded so it was crazy. Kids got hurt, some of my friends are in the hospital still, but we're lucky to make it alive and that's all that matters."

The group met with deputies in North Fork before being escorted back into the area to pick up boats, RV's and trucks full of camping gear.

Mendizabal explains, "Going up there to pick up everything and see the massive destruction this fire has created, it's very sad. I don't know if we're going to be able to come up here and camp because there's no more trees, everything is burned."

Some areas are still burning. That's why 250 Marines and sailors from Camp Pendleton are now joining the battle.

Action News was there as one group spent the day doing a grid search for hot spots near Mammoth Pool Road.

The servicemembers say the tools, protective gear and mission itself are all much different than any other operations they've experienced, but after a week of training, they were ready to take on the challenge.

Master Sergeant Juan Guillien says, "The thing about the Marines and Sailors that are out here, we're used to adapting to any situation. We like to say in the Marine Corp any clime, any place."

Guillien is a Fresno native and says he's thankful for the opportunity to help protect the people and land that he loves.

He adds, "I feel extremely honored and humbled to be back in my home town, my home county."