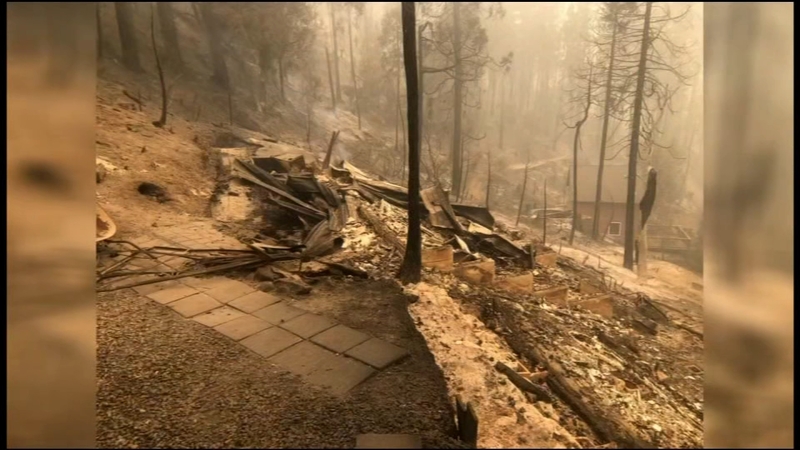 ALDER SPRINGS, Calif. (KFSN) -- Photos show what Brian Merzoian's dream home in Alder Springs looked like before the Creek Fire and the rubble that remains now.

He says, "It's devastating. You just realize your place is literally reduced to ash and everything that was in it, there's really nothing recognizable. I could see the woodstove survived, but that's about it."

Merzoian has worked as a campus safety assistant at Bullard High for nearly a decade but loves living in the mountains. On September 5th, his beautiful view was suddenly obstructed by smoke. He drove his daughter to safety as a precaution, and by the time he returned, evacuation orders were already being issued.

He says, "I've got a little Subaru so I grabbed some basic items, some financial documents, pictures, family memorabilia and a quick set of clothes and got the dog out of there."

Merzoian later tracked down his cat and brought everyone to a friend's house in Fresno. In the days that followed, he learned that flames had raged along Auberry Road, destroying several structures, including his cherished cabin.

"It's unbelievable even though we knew that danger was there, you just think you're going back to your home," says Merzoian.

His loss touched the hearts of many in the Bullard community, including senior Nicole Goyette. She says Merzoian is always there for the students, so she and a former classmate wanted to be there for him.

"At one point we were like let's just raise money, and he can use it however he needs, and it really took off."

A GoFundMe page they started quickly exceeded the original $1500 dollar goal and has since soared well past $6000! Merzoian says he's overwhelmed with gratitude and feels a sense of peace knowing that one day he will rebuild.

He explains, "I feel like everything is going to be okay. How could I not with all the love and support from people that are close to me, from my work family? All the people here at Bullard have been amazing."

Goyette says even though the fundraiser has surpassed its goal, she plans to leave it open for now in case anyone else would like to support Merzoian.