Crews in SoCal battling six wildfires, winds continue to be an issue 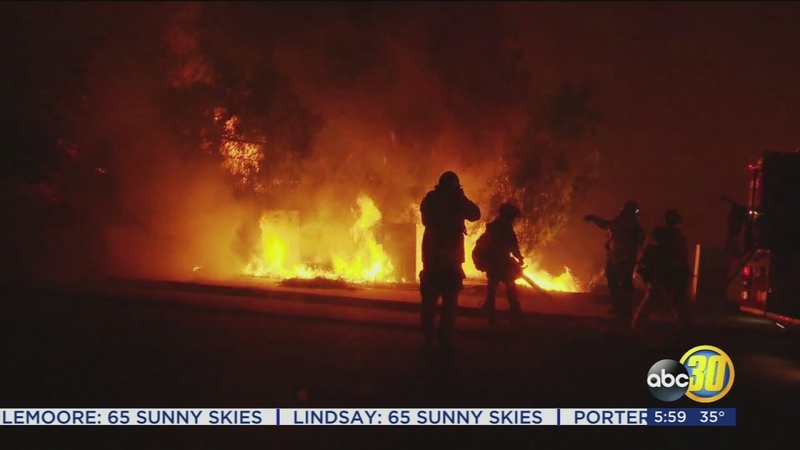 Crews in SoCal battling six wildfires, winds continue to be an issue

Six wildfires burning in Southern California are not showing any signs of stopping after charring more than 150,000 acres so far.

Red flag warnings remain in effect through Sunday. The winds are expected to subside a bit Friday but will pick back up again Saturday, causing concern of more fire danger right into the weekend.

Fire crews are trying to control the newest blaze that sparked in northern San Diego County. The Lilac Fire has already burned 20 homes.

Authorities said Thursday night the fire has the potential to reach Oceanside and Camp Pendleton Marine Base.

This fire already ravaged trailer homes in a retirement community in Fallbrook and killed racehorses at an elite training facility.

Governor Jerry Brown has declared a state of emergency in San Diego County.

At least three people suffered burn injuries and two firefighters have been injured battling the flames.

Firefighters are slowly containing a brush fire that broke out in Riverside County on Thursday.

The Liberty Fire in Murrieta has charred 300 acres and destroyed at least one home after breaking out-- it is now 10-percent contained.

Evacuation orders are in place for some areas near the fire and schools there will be closed today as a precaution.

Hundreds of firefighters are battling this blaze on the ground and from the air.

Winds continue to drive the Thomas Fire as it expands in Ventura County.

The destroyed more than 400 structures, many of them homes, and has burned at least 132,000 acres. At this time fire crews only have the blaze 10-percent contained.

Mandatory evacuation orders were issued for residents in Faria Beach and parts of Carpinteria Thursday as the fire continues its destructive path across Ventura County and into Santa Barbara County where the governor has now declared a state of emergency.

No deaths have been reported.

In Los Angeles County, fire crews are making some gains as they continue to douse the Creek Fire, which has scorched more than 15,000 acres in the Sylmar area.

All evacuation orders were lifted Thursday, except for residents in Limekiln Canyon.

At least 15 structures have been destroyed and 15 others damaged.

Los Angeles Mayor Eric Garcetti declared a state of emergency in the city.

The cause is still under investigation.

Evacuations have also been lifted in the Rye Fire, which is burning in the Santa Clarita area of Los Angeles County.

That fire has charred 7,000 acres and is now 25-percent contained.

The quick-moving brush fire consumed thousands of acres and triggered evacuations of homes and schools after it sparked on Tuesday.

One structure has been destroyed in the blaze.

Also in LA County, some residents are now back in their homes in the Bel Air area as firefighters continue to make significant progress on the Skirball Fire.

The 475-acre fire is now 20-percent contained and has destroyed at least four homes-- 12 Others were damaged.

Some streets reopened Thursday night, allowing residents to return home. Other areas are still closed as of Friday morning.

The Skirball Fire broke out Wednesday near the Getty Center Museum.

That museum is expected to be back open Friday.