Firefighters had to suspend service to medical aid calls as they battled multiple large fires in the Fresno area.
KFSN
By Gilbert Magallon 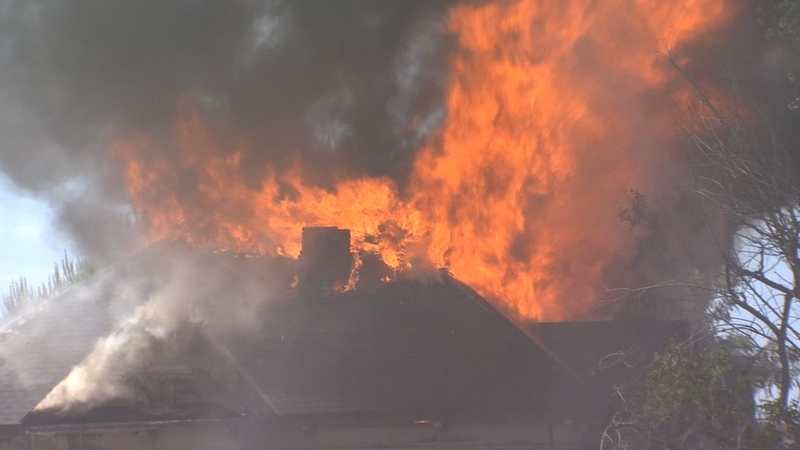 FRESNO, Calif. (KFSN) -- It was just before 4 on Thursday afternoon when Fresno firefighters arrived at a house fire on Diana street and Illinois in central Fresno.

Fire officials say they've responded to fires here in the past, but nothing quite like this.

They found heavy flames tearing through the century-old abandoned home.

"The way that fire was burning and the way the fire was, plus the previous fires that we have had and the fact that we know this home has a basement in it we did not make entry in the building," says fire battalion chief Dan Omeara.

Flames were seen coming through the roof of the structure at Diana and Illinois near the Community Regional Medical Center.

They immediately took a defensive position, calling for backup.

As 40 firefighters fought the flames, another fire broke out a few miles away in a Fresno County island, this one sparking at Clovis and Dakota Avenues.

"There was a father and his two children who started to smell smoke inside their house. They went outside and saw smoke coming out of the attic vents," says battalion chief Tony Escobedo.

As the clock struck five, another fire broke out of Highway 41 just north of Fresno near Avenue 7.

The fire charred the median and both hillsides leading to the Woodward Park and Bluffs neighborhood.

Flames torched about three acres of dry brush on both sides of the freeway and the median.

Traffic slowed to a standstill and resources were stretched thin.

"We are pretty much struggling with staffing issues at the fire department and we need more firefighters quite frankly," says Escobedo.

These three fires were just a small snapshot of what the Fresno Fire Department has faced every day.

Fire crews have responded to more than 300 fire calls this month alone.

That number jumps to more than 26,000 for the year so far, leaving fire officials baffled.

"The amount of fires that this city produces, especially this year, is hard to fathom," says Escobedo.

Firefighters believe the fire in central Fresno may have been started by homeless people.

Meanwhile, the cause of the highway fire is still under investigation.