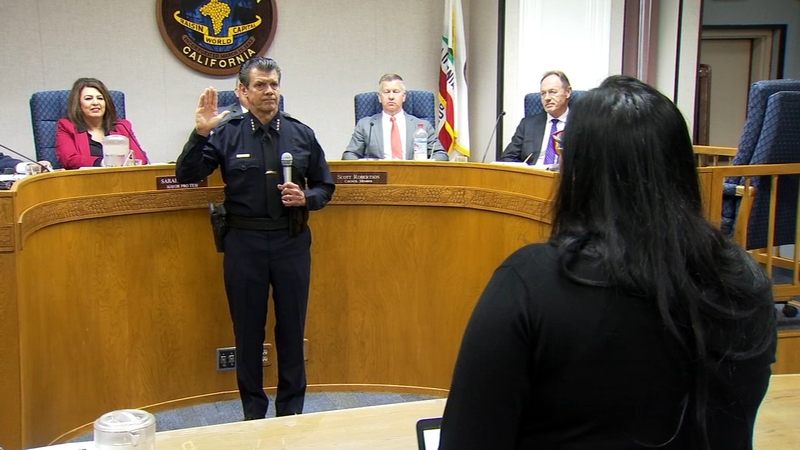 SELMA, Calif. (KFSN) -- Over the weekend in Selma, a woman and child were shot.

Late last year, a man was gunned down in from of his own home

It's violent cases like these that the new Selma Police Chief, Joseph Gomez, hopes to solve and put a stop to in the near future.

"I want to reduce crime, improve their quality of life and listen to the community," Gomez said. "My strategy will be for the betterment of this community."

Gomez came to Selma after serving more than 30 years at the Fresno Police Department and was sworn in Monday night.

He says his first order of business is to put a stop to ongoing gang crime, and that could mean collaborating with other agencies.

"There have been gang shootings; that's one of the first things I'm going to look at," Gomez said. "What are we doing? What can we do better to stop gang violence? Who can we collaborate with, whether its MAGEC, the SO, the outlying cities adjacent to us? How we can work with them to stop the gang violence."

"His experience working with MAGEC and all the other gang eradication units is going to be a great asset to Selma," says Selma City Manager Theresa Gallavan.

His plan couldn't come at a better time.

"That is not going to happen any longer," Gomez said. "We're going to listen to our community and improve the quality of life."

Gomez says a new police station that's expected to be ready by the fall will also help in tackling crime.

"With a facility like that, you can have large scale operations like MAGEC team come in here, SWAT teams, it's going to help with all that," MAGEC said.