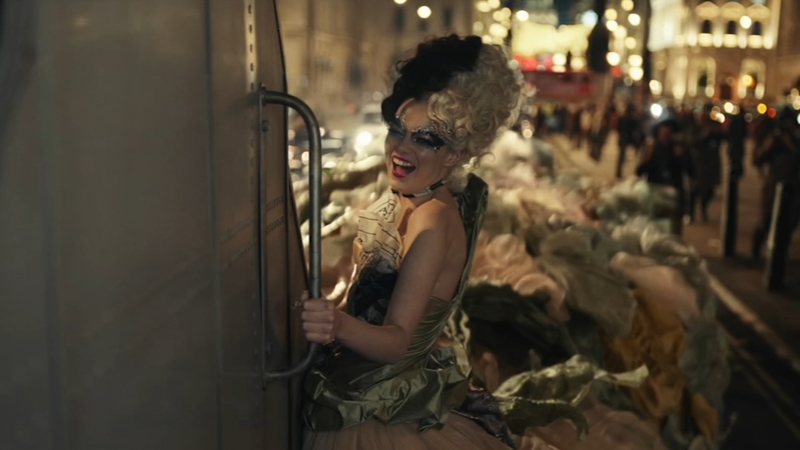 'Cruella' reflects on big, etravagant film made for return to theaters

While we know Cruella de Vil has a sense of style from the previous works, Gillespie created a style explosion in his film.

"It just kept evolving," he said. "It just kept getting bigger and bigger as we were working with the character and she becomes this fashion maverick, we had to create these set pieces worthy of that. And being set in that punk world, and having that attitude - mopeds turning up at events and garbage trucks driving into red carpet events - it was really fun to work with."

EXCLUSIVE: Emma Stone hopes her portrayal of Cruella de Vil will inspire viewers to be "more bold, more outrageous and more your true, authentic self."

It's a movie that needs to be seen on a big screen.

"I wanted to make a film that would be an enormous amount of fun to go watch, just to have a blast. Obviously, there's the gravity and a real emotional journey, but I just wanted to walk out of there smiling," said Gillespie.

Dog lovers may fall in love with the film and its canine stars. But they weren't necessarily the easiest actors on set.

"I gotta tell you, Dalmatians are not that easy to work with, particularly when there's always three of them at once," he said.

The project also gave him the chance to learn some new things about a character as iconic as Cruella.

"She's gotta stay true to herself," Gillespie said. "She's got a society which is trying to suppress her, color within the lines in the 60s, and she's being punished for it and not being true to who she is. It's not until she truly leans into who she is and her true nature, that's when she blossoms."
Report a correction or typo
Related topics:
arts & entertainmentmoviemovie theaterdisneyfashion
Copyright © 2021 OnTheRedCarpet.com. All Rights Reserved.
TOP STORIES
Omicron updates: New US travel rules go into effect Monday
US to stage diplomatic boycott of Winter Olympics
21-year-old shot to death outside Stevinson bar
4 people killed in plane crash near Visalia airport
1 hospitalized following suspected DUI crash in Fresno
Ave 360 in Tulare County closed after semi crash
Part of Kaweah Health shut down, patients evacuated due to flooding
Show More
Better.com CEO fires 900 employees on Zoom call
Early reports on omicron variant encouraging, Fauci says
COVID vaccine mandate announced for NYC private-sector workers
Clovis police looking for 2 suspects who robbed ULTA Beauty store
1 arrested for Merced double murder
More TOP STORIES News