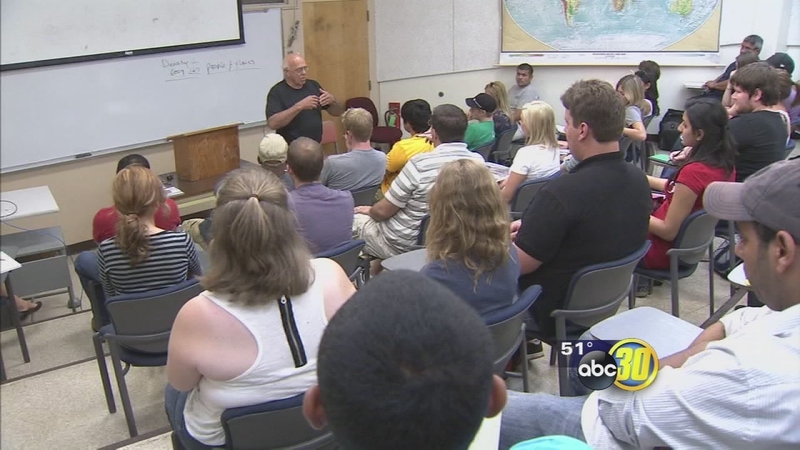 FRESNO, Calif. (KFSN) -- California State University faculty members are moving forward with plans to strike for five days in April if an ongoing contract dispute is not resolved by then.

Faculty and staff at Fresno State, and at the 22 other campuses in the CSU system, said their salaries have not kept up with inflation for nearly 10 years. They are willing to strike this spring for the compensation they deserve.

For nearly a year the California Faculty Association has waged a Fight for Five, a five-percent general salary increase for nearly 25,000 faculty at the CSU's 23 campuses.

Chancellor Timothy White and CSU management, instead, have offered only a two-percent increase. "The faculty don't want to strike, we would much rather focus on the work that we love, which is mentoring students, engaging in research, and sustaining our university," said Dr. Jennifer Eagan, California Faculty Association.

Monday morning the plan for a five-day potential strike was announced for April 13th through 19th. English professor Lisa Weston is vice-president of the Fresno State chapter of the CFA, she said they have been pushing the CSU since last May over the raise for the 2015-16 academic year. "The first step is getting them back to the table and getting them back to the table with a real offer, because at this point, they have said two-percent of the compensation pool. Which is not a general two-percent salary increase for faculty."

While talks have stalled, both sides are open to renegotiations. Chancellor White released this statement saying, "The collective bargaining process continues, and a strike cannot be conducted until the end of the process. The California State University remains committed to reaching a resolution."

He pointed out that "The strike should not interfere with students being able to complete their semester and quarter courses and graduate on time."

Some Fresno State students have concerns about the potential strike, but support the decision. "For the teachers, it is a good idea. If they aren't getting the pay raises that they deserve they need to do something about it. I think a strike would be something good for them," said Ricardo Ramirez, Fresno State Student.

The five-day strike will also impact meetings and office hours. Weston said disconnecting from students will be difficult for some. "We're very emotionally invested in being in the classroom, and, in doing our research and helping run the university to really be a part of it," said Weston.

A third-party fact-finding report will likely be released in March and that could bring both sides back to the bargaining table.