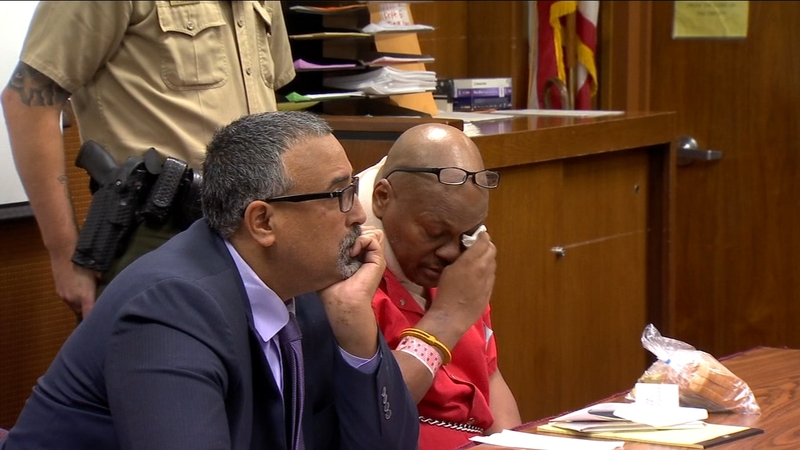 FRESNO, Calif. (KFSN) -- A battle over beer ended with one man dead and his attacker will now serve a life sentence.

Curtis Michael Davis used a sword hidden in his cane to kill Bernard Jackson outside a southeast Fresno convenience store back in April.

As he learned his punishment Wednesday, he didn't give Jackson's family an apology, and he even interrupted them expressing their grief.

Davis started crying as soon as the judge called his case, but his victim's family considered them nothing more than crocodile tears.

"Them tears don't mean nothing now," said Loaitha Reed, the victim's sister-in-law. "Nothing. You should've come in here with the tears and feeling sorry, maybe somebody could've felt sorry for him."

Davis killed Jackson outside the Country Market in a fight over a beer. He claimed it was self-defense, but surveillance video shows Davis was the aggressor and a jury convicted him of first-degree murder.

Even as Jackson's sisters tried to show him mercy, Davis interrupted as they discussed his crime.

"He took a very important person from us," said Jackson's sister, Stephanie Jackson. "He could've called any of us. We would've brought him $1.25 down there. It was people down there who knew our number. Have somebody call us. Why take this life over $1.25."

"I'm the one who gave him the money," Davis interrupted.

"And, Your Honor, you know, I feel sorry for him," Jackson said.

He also wrote letters to the judge criticizing Jackson, the attorneys, and the jury. But none of it changed the final result. He's going to prison.

"This is giving you time enough to get on your knees, Curtis, and ask the good Lord to forgive you," said Martha Jackson, another of Bernard's sisters. "But like I told you before, we forgive you, but we'll never forget."