'Dancing with the Stars' Season 27 winner announced: A dance-by-dance recap of the finale 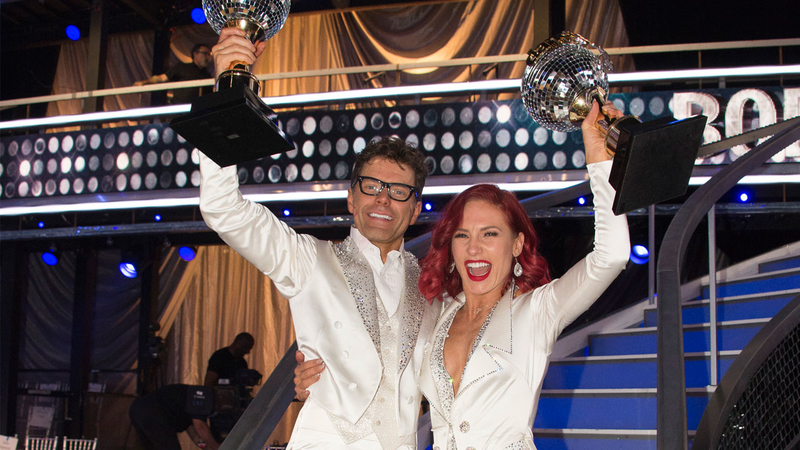 LOS ANGELES -- It was the final night of sequins and spray tans, of glitter and glamour, as Season 27 came to an end for "Dancing with the Stars."

Four couples made it to the finale. They each danced twice in their quest for mirror-ball glory. One routine was a dance they've done previously during the season, the other was the fan-favorite freestyle.

The show began with a nod to the Macy's Thanksgiving Parade: floats and flags and a marching band! But they quickly got down to business since there were eight routines to get through in two hours.

Here's a rundown of the night's scores, from highest to lowest:

Evanna and Keo Motsepe chose to redo their Halloween tango... a dance that earned them a 29 out of 30 from the judges! The bar was high but they easily jumped over it during this final round. Evanna says she is grateful for the competition because it helped her rediscover the love of dance she had when she was a young girl. She also thanked Keo for encouraging her to own her power and believe in herself. Carrie Ann Inaba called Evanna the most improved of the competition. Bruno Tonioli said she built on her performance ability week after week and brought a clear, crisp, clean routine to the finale. Len Goodman was the person who gave them a "9" the first time around; Evanna and Keo fixed what he asked them to and it got them a perfect score.

This is Keo's first time to make the finals and he's determined to choreograph a show stopper. He mixes together several styles that highlight Evanna's talent. Len called the routine the cherry on top of a great night of dancing. Bruno thought it was bright and colorful and quirky, and complimented Keo on letting his partner shine.

Milo is filled with pride at what he's been able to prove, mostly to himself, during his weeks at DWTS. It's been meaningful and he's clearly learned a lot, not just about dance but about life. Witney Carson said she feels like she's done some of her best work with Milo. They chose week two's Charleston to do over, because Milo feels that's when people began to take him seriously. They dance while singer Robin Thicke performs and it elevates the performance even more. Len admitted he didn't really like their dance the first time around but this time it was 100 percent right on the money. Bruno compared him to Zendaya from back in season 16 and thinks he is destined for great things. Carrie Ann thinks he might have the Midas touch and called Milo the one to beat.

Witney vowed to put in every bit of crazy moves, lifts, tricks and spins - with some props tossed in for good measure - in order to showcase Milo's versatility. Mission accomplished! Carrie Ann's mind was blown and she said she's never seen a freestyle with so much content. Len also appreciated how the routine highlighted how diverse Milo can be on the dance floor. Bruno's thought: a star is born.

Alexis and Alan Bersten went back to week two when they performed an Argentine tango to the classic music of Swan Lake. Alexis was eager to do it again, knowing how much she's improved over the weeks. She reflected on how much she's changed during this competition; mainly the fact that she has so much more confidence in herself. Len called the dance lovely and lyrical; Bruno praised her focus and their connection; and Carrie Ann likes how much Alexis has opened up to us, and to herself.

In the freestyle, Alan's idea was to show Alexis's empowerment and how she is, right now, on top of the world. He takes that theme literally and the set has them starting on top of a mountain and doing several lifts and tricks and jumps to get down to the dance floor. Len appreciated that they didn't let a powerful song (performed live by Avril Lavigne) overpower the dance and praised the drama, strength and musicality Alexis brought to the ballroom. Bruno pointed out the dance was difficult, both technically and emotionally, but Alexis was on her top game the whole time. Carrie Ann agreed that Alexis is peaking at just the right time.

Bobby has been dubbed "the people's champion" by his partner, Sharna Burgess. They're even borrowing the phrase used on "So You Think You Can Dance" and calling Bobby "America's Favorite Dancer" (it's something they came up with when the best dancer didn't always win on that competition). Bobby and Sharna revisit the Cha Cha they did during trio week to MC Hammer's "Can't Touch This." He chose it simply because it was so much fun. Bobby reflected on how far he's come; when they started he didn't even know what an "eight count" was. But he was a good student, worked hard, and managed to surprise is pro partner ever week. Bruno said he realized what it is he likes about Bobby... that he is always honestly 100 percent himself. Carrie Ann said Bobby has defied the laws of dancing but also has proven that determination pays off. Len joked that Bobby puts the "ham" in "Hammer," and while he'd prefer more content, watching Bobby gives him great joy.

Sharna chose to choreograph the freestyle to a song from "The Greatest Showman" because that perfectly describes Bobby. She sees the joy he brings others and the joy he himself has while he's entertaining people. The routine is energetic and the best part just may have been a lift; DeMarcus Ware came onto the dance floor and picked Bobby up and over his head. The ballroom went nuts! And at the very end, Sharna let Bobby really be Bobby... and everyone did one last bit of "flossing." Bobby literally hit the floor when he got three "10s" from the judges, who all praised his spirit and shining light.

SPOILER ALERT
All four couples had a great finale and, of course, it really was always up to the viewers to decide who takes home the mirror ball trophy. In the end, the "People's Champion" triumphed and Bobby and Sharna won the competition for Season 27.