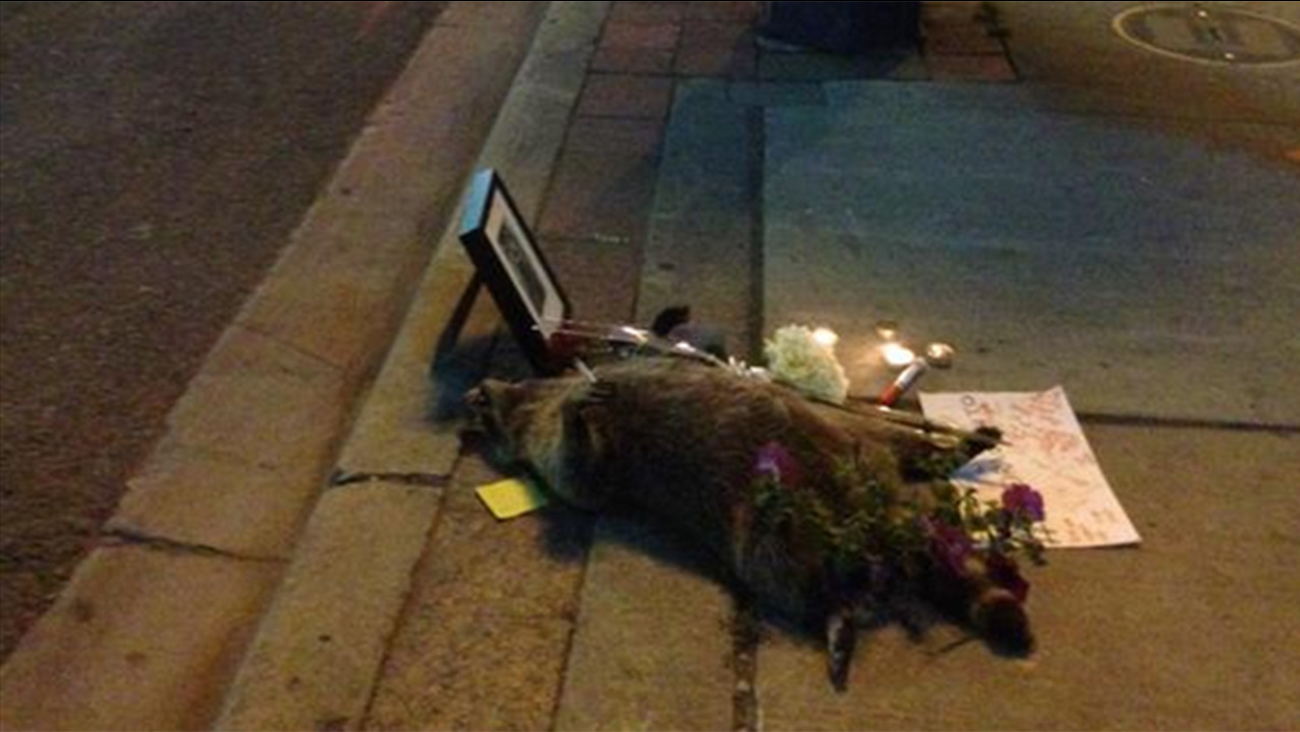 In the hours following a raccoon's roadside death, the people of Toronto rallied to create a shrine for what became known as #deadraccoonTO. (Shauna Pollock/Twitter)

TORONTO, Canada -- A dead raccoon named Conrad has become the center of a bizarre social media phenomenon. As it waited for hours to be picked up by the city, a shrine was built around the creature on the side of the road, propelling it to Internet fame.

It all started early Thursday morning, when people began notifying 311 Toronto, the City of Toronto's contact center, about the roadkill. The center quickly responded that they were on the job.

@311Toronto There’s a dead raccoon on the sidewalk outside 819 Yonge (at the SE corner of Church).

@jasonwagar Thank you for letting us know. This was reported a short while ago and Animal Services has been notified. ^de

As the day progressed, though, the raccoon remained on the street. After someone placed a piece of paper reading "#DeadRaccoonTO," the critter began getting attention on both the side of the road and online.

@311Toronto It’s now after 3 pm and I guess Animal Services hasn’t been by, because someone’s having some fun now: pic.twitter.com/ff0ybbm5cX

Things took a turn for the hilarious when Councillor Norm Kelly joined the party.

Residents are being asked to keep their green bins open tonight in honour of #DeadRaccoonTO.

The dead raccoon phenomenon continued to bring people in Toronto and around the world together. The memorial continued to grow. Condolences were made, and songs were written on behalf of the fallen raccoon.

I don't really understand how the magic that is #DeadRaccoonTO is happening, but it is fantastic that our city can come together for this.

It seems to me you lived your life, like a raccoon in the trash Never knowing what bin to eat from, when the lane got dark #DeadRaccoonTO

Someone in a nearby building posted a video of pedestrians approaching the raccoon. One was a city worker, the video uploader said, who took stock of the raccoon and then drove off.


Tap to watch if on the News app.

By nightfall, someone had added candles to the shrine.

For those curious, #deadraccoonto is still here. His shrine has grown. I don't understand. pic.twitter.com/gOgd6g90SO

At the end of the day, the roadkill was collected by city officials, freelance reporter Kris Pangilinan tweeted.

Here is The City of Toronto worker removing the raccoon. #DeadRaccoonTO pic.twitter.com/nwbgOIIEQB

Pangilinan told ABC it had been there 18 hours.

"It's amazing how Torontoians can embrace roadkill and turn a city problem into some fun," he said. "We were sad to see it go, but it couldn't stay there forever."

"The events which unfolded under the hashtag #DeadRaccoonTO are a testament to Toronto's unique, humorous and loving character," he said. "A number of themes were prevalent on Twitter as the hashtag took off. The most notable would be dark humour, the tragic nature of death and the many aspects of Toronto living."