Déjà vu: Burglars return to Lululemon to steal again after burglarizing it earlier this week 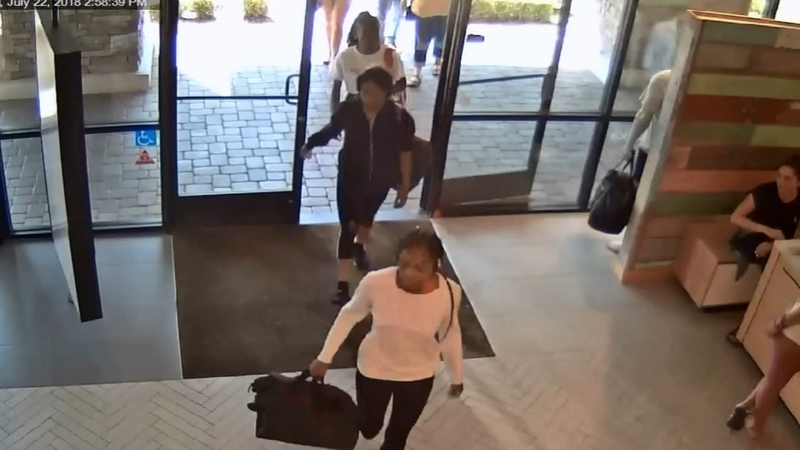 Déjà vu: Group of women return to Lululemon to steal again after burglarizing it earlier this week

FRESNO, Calif. (KFSN) -- Less than an hour after Action News interviewed police about thieves hitting Lululemon over the weekend at Fig Garden, officers say the same three women from the surveillance video returned for round two.

"They are very bold, very bold," said Lt. Joe Gomez. "I had no idea it was like that. There was a young boy sitting there, he looks like he's ten, and they were right there committing their theft."

This is insane. Fresno police tell me right after our interview, these 3 women went back into Lululemon and stole thousands more dollars worth of clothes. An employee from Jack's Urban Eats next door tried to stop them and recovered one bag of merchandise. https://t.co/Mhjmjc62AN

If their brazenness surprises you. It shouldn't. Police say these women have hit Lululemon stores in California 15 times, often revisiting the same store. It is always the same. So far, they have stolen about $135,000 worth of merchandise.

"They walk into the store, a group of two or three come in with bags and the start filling those bags with items," said Byron White with the Walnut Creek Police Department.

Here's video of the thieves raiding @lululemon in Fig Garden and what police believe is the same trio stealing from another chain in Berkley. in Fresno, the women walked away with 148 pairs of yoga pants -- about $17,000. pic.twitter.com/uz4qIkAxzV

The store has a policy where employees cannot chase the thieves once they have walked outside. Luckily, another business stepped in to help Tuesday. Police say the manager of Jack's Urban Eats saw recognized the women when they parked by his restaurant and managed to wrestle away one of their duffle bags.

The thefts began happening July 8th, stretching from Stanford to Berkley. Police made an arrest one point in Walnut Creek and recovered some merchandise, but they say the suspects bailed out shortly after. They first hit the Fresno location Sunday and then returned Tuesday afternoon.

RELATED: Group of women steal $10,000 worth of Lululemon leggings

"If they don't have probation, parole, or warrants already, those aren't crimes most jurisdictions keep people in jail for," said Lt. Gomez. "My understanding is they did get out on that crime. It's very lucrative."