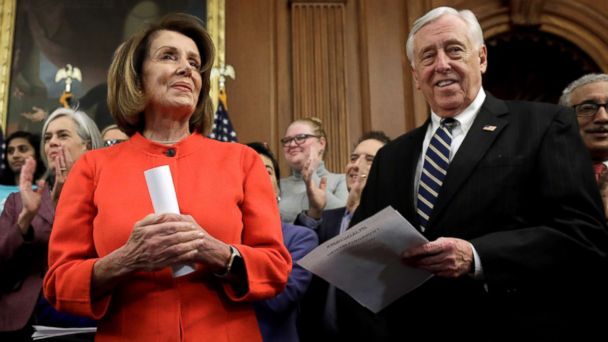 Ten years after President Barack Obama signed the Lily Ledbetter Fair Pay Act into law, House Democrats rallied to renew the push towards equal pay for equal work, stressing that while there has been progress towards pay equality, women still earn just 80 cents to the dollar a man makes for the same work.

House Speaker Nancy Pelosi says every member of her caucus signed onto an effort reintroducing the Paycheck Fairness Act, and with the partial government shutdown finally over, her new majority is pressing on with its agenda.

"It's really important to know this is part of a fuller agenda of paid sick leave and access to quality, affordable child care to make women in the workplace have the opportunities that we all should," Pelosi, D-Calif., said.

Ledbetter, the plaintiff in a landmark employment discrimination case, was on-hand to mark the occasion and urged Congress "to step up again."

"I'm here because equal pay for equal work is an American value," Ledbetter said. "And it's time that we have American reality."

Women who work full time in the United States are paid on average 80 percent of what men are paid, according to a 2018 study by the American Association of University Women, an advocacy group that promotes equity and education for women and girls. The analysis also found that disparities are even sharper among Latinas (at 54 percent) and black women (at 63 percent) and range by state from a low of 70 percent in Louisiana and Utah to a high of 89 percent in New York.

The political firepower that Democratic women possess heading into the 2020 presidential campaign continues to grow -- with a record number of women expected to seek the Democratic nomination coupled with a record 102 women serving in Congress -- though there is still a majority of white men serving in Congress. A recent ABC News - Washington Post poll found that nearly two-thirds of women say they have already ruled out voting for President Donald Trump in 2020.

Ten years ago, women earned just 78 cents to each dollar a man earned at the same job.

The bill, designated as H.R. 7, would end so-called pay secrecy, easing workers' ability to individually or jointly challenge pay discrimination, and strengthening the available remedies for wronged employees, according to the bill's sponsors.

Freshman Democrat Alexandria Ocasio-Cortez said that by prioritizing pay equality, the caucus is sending "a powerful message that says women matter, that people of all gender identities should be treated equally."

"Whether it's a post-it note that you discover in your manager's office, or whether it's a Google doc that you hide from your boss, we implicitly recognize as women that the pay gap and wage gap is an injustice that persists through secrecy and it's an injustice that persists to the present day," Ocasio-Cortez, D-N.Y., said. "We cannot ask for salary history and pay people depending on their salary history anymore, because it is time that we pay people what they are worth and not how little they are desperate enough to accept."

House Majority Leader Steny Hoyer proclaimed that he backs the legislation not only to represent his three daughters, three granddaughters and two great-granddaughters, but also stand for men "who rely for their daily wellbeing on wages of their wives, of their moms, of their partners."

"This is not just about women. It's about families and what America stands for," Hoyer, D-Md., said. "It is the work that is performed. It is the content of character, the content of performance that ought to be the criteria, not gender."

Hoyer added that the issue is "as much an economic issue as it is a social justice issue" and pledged to schedule a vote on the bill "soon."

"With Democrats now the majority in the House we will be advancing legislation," Hoyer promised. "I bring bills to the floor. This bill is coming the floor. It's coming to the floor soon and we're going to pass it."

The bill has 240 cosponsors in the House, including every Democrat and one Republican, and there are 45 Democratic cosponsors on companion legislation in the Senate led by Sen. Patty Murray of Washington.
Report a correction or typo
Related topics:
abc newsnational
Copyright © 2021 ABC News Internet Ventures.
More Videos
From CNN Newsource affiliates
TOP STORIES