Families picking up the pieces after tornado 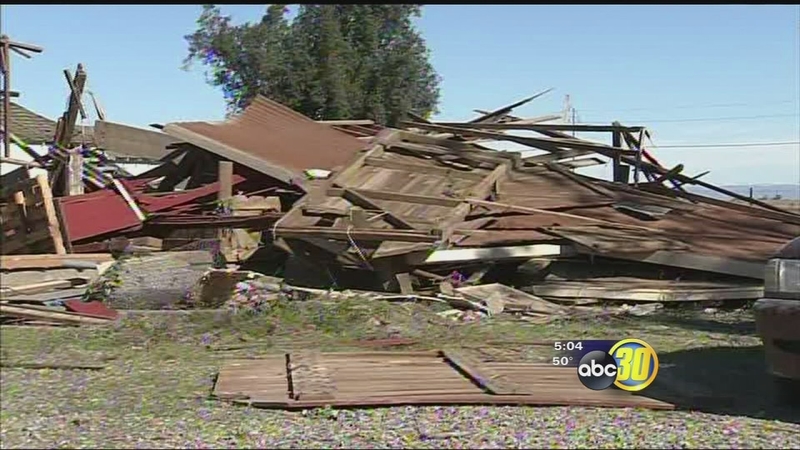 Families picking up the pieces after tornado

DENAIR, Calif. (KFSN) -- Families are trying to pick up the pieces after a tornado damaged more than 20 homes in Stanislaus County.

You can see the damage all around on Zeering Road in Denair. Downed trees and sections of roofs that were ripped right off buildings. The tornado the came through was an EF-1 with wind speeds between 86 and 110 miles per hour.

Jenna Cole captured intense video while her dad clung to their carport when the tornado began lifting it into their air. "At first it was just like adrenaline and fear, and we couldn't imagine that it happened here."

When it was all over, their carport was gone, and their barn -- ripped apart. "One of the pieces from the roof of our barn managed to wedge itself up in the tree, and it's stuck up in there pretty good," said Cole.

Officials said the tornado carved a two-mile path right through town Sunday afternoon. Damaging a total of 21 homes. "It looks like it was about 175 yards in width," said Eric Kurth, National Weather Service Meteorologist.

Sabina Woodard looked out the window just in time to see debris swirling toward her property. "My husband has Parkinson's Disease so we have a hospital bed in the living room. We crawled underneath that, and about that time you could feel the rumble and the house just started shaking, and I thought-- this is it."

The powerful winds shattered their windows, ripped off most of their roof, and destroyed a barn where her husband's prized 1966 ford ranchero was parked. But she's thankful they're alive. "It was really crazy, but at one point it was almost like wow, let's go into a peaceful mode because is this how we're going to go? And we weren't sure if we were going to ride it out or go up with the house."

Crews have managed to restore power, gas, and water to all of the homes except for a couple that are too badly damaged.

The national weather service says California does get about five to ten tornadoes each year, but they often hit ag land, unlike this one that hit the town.