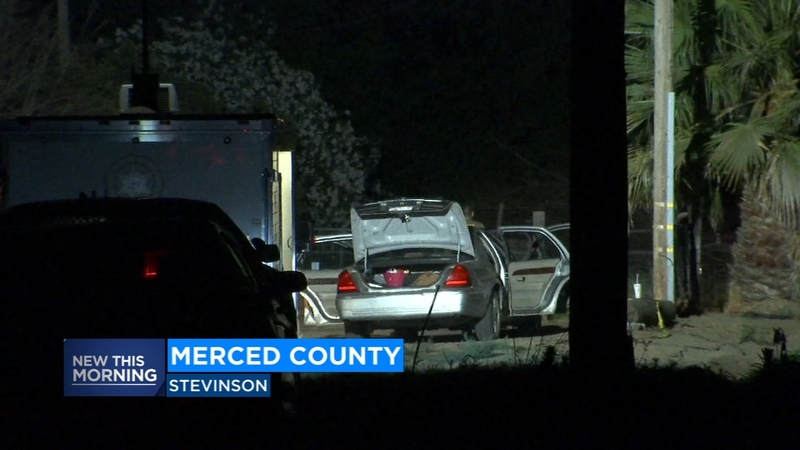 STEVINSON, Calif. (KFSN) -- A shooting in the North Valley leaves one man in the hospital and during the investigation, deputies seized dozens of marijuana plants.

The victim in the shooting was taken to a Modesto hospital and at last check was in critical condition. Deputies are still trying to figure out what exactly led to this shooting.

According to authorities, the shooting happened just after 7:30 Tuesday night at a home in Stevinson. Deputies got a call of possible shots fired. When they got to the area deputies saw a man shot in the stomach laying in the driveway. He was rushed to the hospital.

The suspect was still on the property and arrested. Two other people were detained for questioning.

As deputies began their investigation they found a large marijuana grow on the property. Officials said from the look of it there was possibly 100 plants.

This property was already on Merced County's radar. Before the shooting happened the sheriff spotted the grow from a helicopter and was going to have the marijuana eradication team issue a warrant for the property.

The Sheriff's Office said they have been out to the home numerous times in the past-- including to remove marijuana plants.

Outdoor grows are illegal in Merced County. Residents are only allowed to grown six indoor plants and they must be fully enclosed in a secure structure.

As for the shooting, deputies are still working to figure out the relationship between the victim and suspect.
Report a correction or typo
Related topics:
stevinsonmarijuanapot bustmerced countyshooting
Copyright © 2021 KFSN-TV. All Rights Reserved.
MERCED COUNTY