Despite tensions, Trump offers rosy outlook on G-7: 'Everybody's getting along' 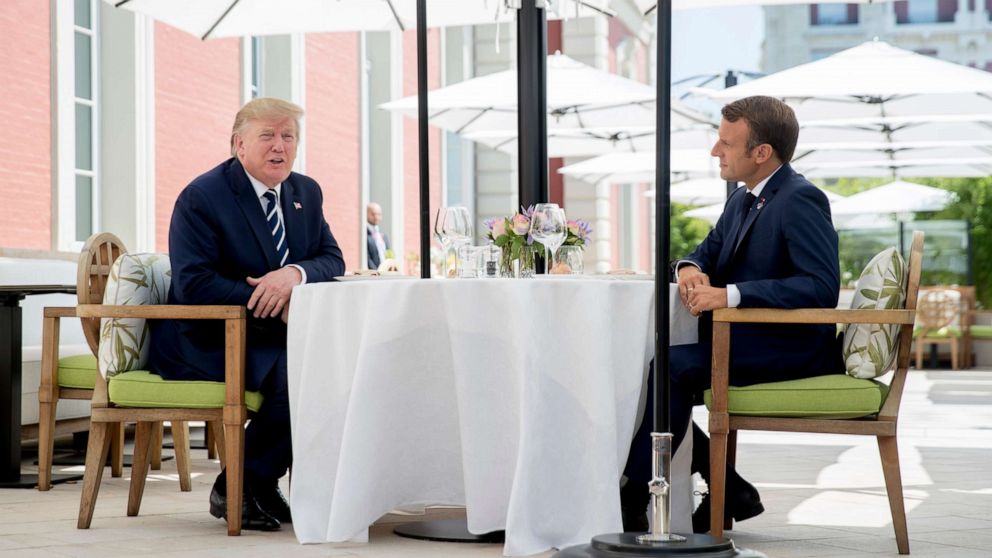 ABCNews
By MERIDITH MCGRAW
SAINT JEAN DE LUZ, FRANCE -- After tangling with world leaders all week and setting off chaos in the global markets with trade disputes, President Trump shared a rosy outlook for the annual G-7 summit.

"So far so good," Trump said over lunch with the President of France Emmanuel Macron. "The weather is perfect. Everybody's getting along. I think we'll accomplish a lot this weekend. And I look forward to it."

On Saturday afternoon, the president touched down in the ritzy resort town of Biarritz for three days of meetings and meals at the G-7 with world leaders from the United Kingdom, Canada, France, Germany, Italy, Japan and leaders from other invited countries.

The annual gathering is often likened to a dysfunctional family reunion, but with serious discussions on pressing issues sandwiched in between photos and dinners.

Over the course of the three-day summit, Trump will attend meetings on foreign security, the global economy - a session added at the last minute by the United States, African economies, gender equality, and the climate.

Climate change talks come as the Amazon rain forest is burning; security discussions come as North Korea continues to launch missiles and Iran continues to make threats; and the economy remains at the forefront as the world faces a potential recession set off, in part, by Trump tweets.

Over lunch on a breezy terrace at the Hotel du Palais, the palatial, five-star spot on the Basque coast where Trump and Macron are staying, Macron, the host of the summit, outlined his agenda and high hopes for the weekend. But he acknowledged some of the ways the United States has chosen to split from the rest of the group.

"We know the divergences we have on climate," Macron said. "But our cooperation will be to reduce carbon emissions."

Last year in Canada, the president defied the G-7 by taking off without signing the official communique, an agreement reached at the end of each summit.

This year, in recognition of just how all over the map the G-7 countries are on different issues, Macron said there won't even be a communique.

He called it "pointless."

Still, at lunch, the two leaders smiled and praised their working relationship even after Trump threatened tariffs on French wine in retaliation for taxes France has proposed on big tech companies -- many of them based in the United States.

"Every once in a while, we go at it just a little bit -- not very much. But we get along very well. We have a very good relationship," Trump said. "Sort of, I think I can say, a special relationship."