Trump, Ryan, pledge to work together; endorsement may come 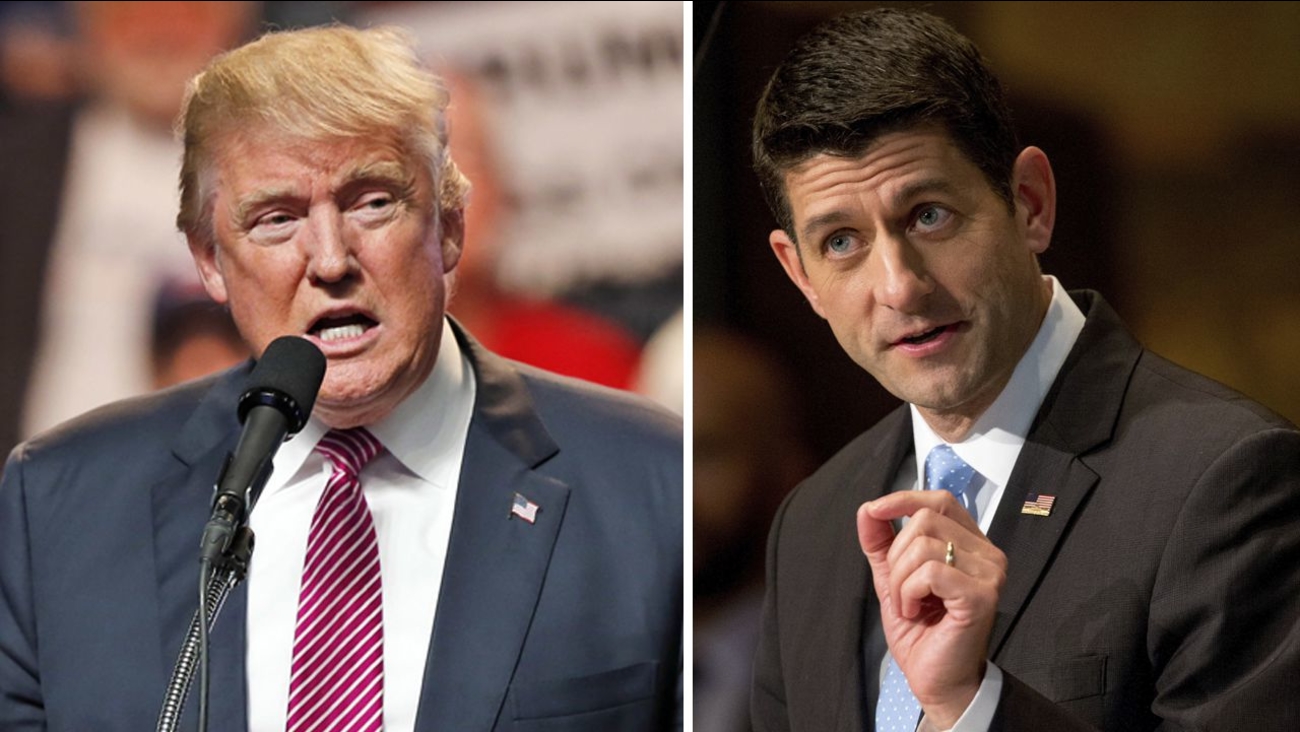 WASHINGTON -- Donald Trump and House Speaker Paul Ryan pledged to work together despite their differences after a meeting Thursday aimed unifying a party torn over Trump's rise to the cusp of the Republican presidential nomination. The speaker appeared closer to offering a full-throated endorsement.

Trump and Ryan issued a statement describing their meeting as a "very positive step toward unification" that recognized "many important areas of common ground" as well as areas where they disagree. Ryan stunned Republicans by withholding his endorsement a week ago when it became clear Trump was on a firm path to the nomination.

The much-anticipated meeting unfolded Thursday morning as more Republicans have begun urging the party to put the extraordinary discord behind. The statement by the two suggested both are invested in tamping down the Republican infighting as they try to pull the GOP together for the fight against Hillary Clinton and Democrats in the fall.

Ryan told a news conference they are "planting the seeds" to accomplish that.

Republican Rep. Lee Zeldin of New York, a Trump supporter, said it will help both the candidate and the speaker if they can work through their differences.

"I don't think it's do or die, any endorsement in particular," he said outside the building. But "Donald Trump's candidacy is strengthened with an endorsement from the most powerful person, top-ranking Republican in the country. It helps."

On the eve of the meetings, Trump eased his defiant tone of recent days. Asked on Fox News who leads the party in his view, he said Ryan. "I would say Paul for the time being and maybe for a long time," he said.

"We can always have differences," he said. "If you agree on 70 percent, that's always a lot."

The two men represent vastly different visions for the Republican Party, and whether they can come together may foretell whether the GOP will heal itself after a bruising primary season or face irrevocable rupture.

Trump, for years a registered Democrat, has offended women, Hispanics, and others while violating establishment party orthodoxy on numerous issues Ryan holds dear, from trade to wages to religious freedom. Ryan, a policy-focused conservative, insists the GOP must be a party of ideas, and has championed an agenda that has drawn Trump's scorn by pushing cuts in Medicare and other government programs.

Indeed, a broader swath of Republican voters appears to be moving behind Trump, despite big-name holdouts such as Ryan, both former president Bushes and the party's 2012 nominee, Mitt Romney. Romney went after Trump on Wednesday over his refusal thus far to release his taxes, calling it "disqualifying" and asserting that the only explanation must be "a bombshell of unusual size."

Still, almost two in three Republican-leaning voters now view Trump favorably, compared with 31 percent who view him unfavorably, according to a national Gallup Poll taken last week. The numbers represent a near total reversal from Gallup's survey in early March.

And on Capitol Hill, where Ryan has managed to remain popular since taking over as speaker in the fall, some Republicans made clear that they would like to see him come around to supporting Trump sooner rather than later.

Rep. Tom Cole of Oklahoma, an ally of GOP leadership, said Thursday his biggest worry about Trump is that he is "'unpredictable." Yet Trump is also a "change agent," Cole said. "That's exactly what people want right now, so in that sense he's very well-positioned for a general election."

"It seems to me they have every incentive to find common ground," he said of Trump and Ryan, "because to be successful they both in a sense need one another."

Three meetings were on tap for Trump: the one with Ryan and the party chairman, then with Ryan joined by other senior House GOP leaders and one with Senate Majority Leader Mitch McConnell and other top Senate Republicans.

McConnell was quick to embrace the mogul after he clinched the nomination and said this week that Trump is looking like he'll be "very competitive" in November.