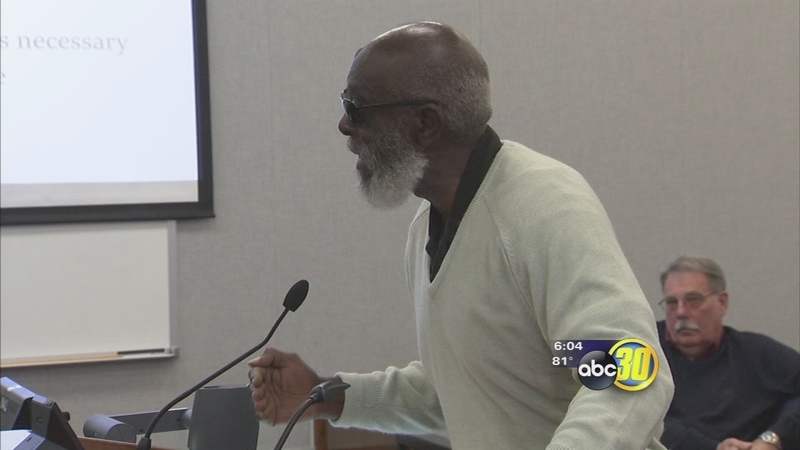 FRESNO, Calif. (KFSN) -- The drought is causing tensions between residential water users and almond farmers. The almond trees were planted about a year ago, and get plenty of water from a new well. Some neighbors who've seen wells go dry and have cut back on water use say it's not fair.

Eli Garcia explained, "And when you see all these trees around it's kind of like, I'm doing this sacrificing this so they can water their trees and it's just no justice as far as I'm concerned it."

One of his neighbors, Robert Mitchell took these concerns to the Fresno County Board of Supervisors.

Mitchell said, "My community is surrounded by almond trees which will not produce product for another three years which is 2018, yet in the one small area I live we have lost five wells in a one block area."

Mitchell urged the board to think about a temporary ban on new almond orchards. He said, "Look at the possibility of saying we made need to come to a moratorium of planting of new crops that are labor intensive."

That's a shocking idea in farm country, but Sarge Green head of the Water Institute at Fresno State, says it's becoming a more common cry around the Valley.

"Every county I have worked in thus far there has been a community that has asked the same question, we want you to adopt a moratorium," Green explained.

Green doesn't think such a moratorium is a good idea because almonds are the Valleys biggest crop, but he notes under state law drinking water is the highest use for water, and competition for water between plants and people is likely to intensify.

Ag is the number one economic driver but like I said people do come first but there may be some push and shove in the very near future especially if the drought continues. And Mitchell says going without water, being unable to cook, bathe or flush a toilet becomes a threat to public health, a higher priority he thinks, than almonds.

Mitchell explained, "Everyone is pumping out of this aquifer and if this goes dry everyone, everyone will be suffering as a result, simply for the opportunity for some to cash in on this craze of almonds."