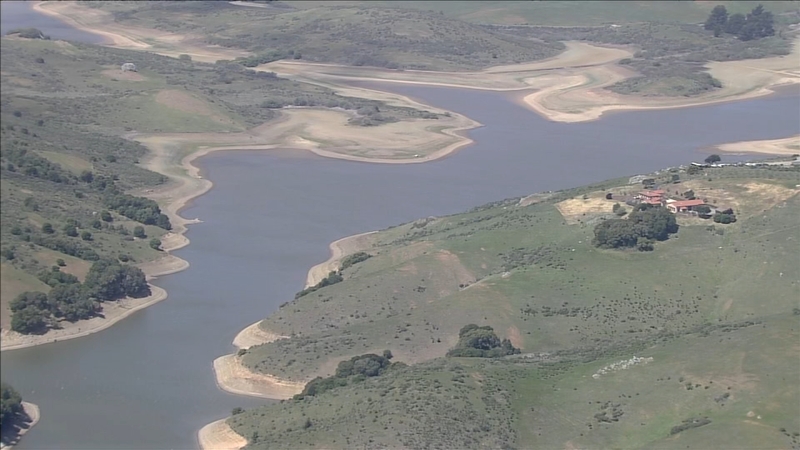 SACRAMENTO, Calif. -- Standing in the dry, cracked bottom of what should have been a more watery Lake Mendocino, Gov. Gavin Newsom declared an emergency executive order Wednesday in two Northern California counties in response to drought conditions affecting much of the state and the West Coast.

The announcement affects Mendocino and Sonoma counties, where Newsom says drought conditions are especially bad, but it falls far short of a statewide declaration despite some regions seeking one. California, which is now in its second year of drought conditions, is bracing for another devastating wildfire season after a winter with little precipitation.

"Oftentimes we overstate the word historic, but this is indeed an historic moment, certainly historic for this particular lake, Mendocino, which is at 43% of its capacity this time of year," Newsom said, standing where 40 feet (12 meters) of lake water was supposed to be.

The order allows the state to prepare for the expected effects of the water shortage more quickly and to take swifter action in restricting and managing usage. State regulators have issued letters to roughly 700 vineyards, residential suppliers, farmers and others with water rights to the Russian River that they may have their water curtailed, said Grant Davis, general manager for Sonoma Water, which manages water in the region.

State officials at Wednesday's briefing said the order could expand statewide, and likely will given conditions.

"If you're in a different part of the state, you probably need to know that this will one day happen to you," said Karla Nemeth, director of the California Department of Water Resources.

The department says this is the fourth driest year on record statewide, especially in the northern two-thirds of the state. But Newsom said urban Californians are also using 16% less water than they were at the start of the last major drought from 2012 to 2016, and he urged residents to conserve.

The Russian River watershed is unique in that it relies much more on falling precipitation as it is "geographically isolated" from larger water systems in the state, said Wade Crowfoot, the state's natural resources secretary.

Farmers and leaders in Central Valley counties are pleading with the governor to declare a statewide emergency, saying they desperately need water.

Local water districts are already taking action against dry conditions, with the district serving a chunk of Marin County telling residents they'll have to stop washing vehicles at home and filling backyard pools starting next month, or face fines.

Newsom said he's not anticipating issuing mandates but added, "I am very clear that we're gaming out everything."

About three-quarters of the western United States is in what is called a megadrought, he said.

Last week, hundreds of farmers who rely on a massive irrigation project spanning the Oregon-California border were told they'll get a fraction of the water deliveries they need as federal regulators attempt to balance agriculture against federally threatened and endangered fish species central to the heritage of several tribes.